By Christi Scott, CNN
Updated 1:24 PM EDT, Mon September 7, 2015
Link Copied!
Ad Feedback
The complete Eatwell tableware set
Eatwell
Both the red and yellow sets feature bowls with slanted basins and spoons designed to fit the natural curve of the hand.
Eatwell
Both red and yellow sets feature bowls with right angles, to allow patients to scoop their food and avoid spills. The matching spoons are designed to fit the curvature of the bowls.
Eatwell
The yellow handled cup provides additional support, which prevents accidental spills, and is designed for patients with physical limitations, such as arthritis.
Eatwell
The red cup features a stabilized rubber base and a lid, which help prevent accidental spills.
Eatwell
The white tray in the set features tabs near the base, where a bib or apron can attach to collect food that may spill, preventing clothing stains. It also allows the vibrant colors from the bowls to stand out, keeping focus on the food.
Eatwell
The Eatwell tableware set, designed for patients with cognitive impairments, such as Alzheimer's disease.
Eatwell

No one ever wants to see loved ones suffer in their later years.

Not everyone takes the time to do something about it.

For Sha Yao, watching her late grandmother’s decline at the unrelenting hands of Alzheimer’s disease prompted the industrial designer to take creative action in the form of assistive tableware.

Thrust into the life of a caregiver, Yao felt the impending burden grow as her grandmother’s condition deteriorated.

“It was heartbreaking, and I felt so helpless watching her suffer,” Yao said. “She had always been very sharp and full of life.”

Yao refused to face this disease with her hands tied hopelessly together.

So she put those hands to work. 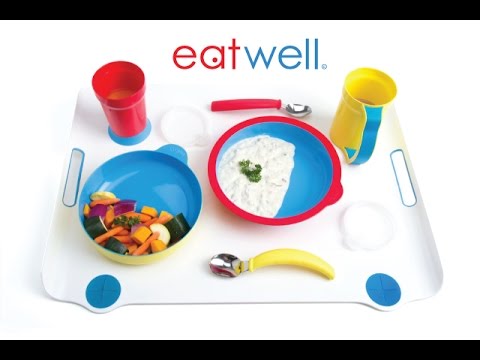 Yao left Taiwan to begin her graduate studies in industrial design in the United States.

While she was not there physically with her grandmother, Yao’s commitment never wavered.

“I decided to focus on helping her eat, because it was an activity she would do a few times a day, every day, and it was critical to her health,” Yao said.

She set out to learn as much as she could about Alzheimer’s disease through years of research and volunteering at various senior care facilities.

After reading a Boston University study on the impact of bright colors, Yao realized the smallest of details could greatly enhance the quality of life for both sufferers and caregivers.

The study found that when presented with flatware featuring bright colors, dementia patients were significantly more likely to consume food and beverages.

Yao observed firsthand the frustrating task that eating had become for both the patients and caregivers.

Patients were less likely to eat the proper amount of food because much of it would spill on the floor or on their clothes.

What was once a warm family ritual had now become an arduous hurdle.

With years of research and observation under her belt, Yao set to work creating and perfecting Eatwell, an assistive tableware set designed specially for patients with cognitive impairments like Alzheimer’s.

Every detail in the set was crafted with the patient’s well-being and dignity in mind.

For instance, the contrast in colors between the interior and exterior of the bowls allow the consumer to distinguish food from the bowl itself. Typically, white plates confuse patients about where the food is and can cause frustration.

Each bowl features a slanted basin, which allows the food to gather naturally toward the bottom and makes for easier scooping against the right angles of the bowls’ edges.

Spoons are engineered to fit the curvature of the bowls, which helps minimize spills, because they also fit the natural curve of the hand.

This provided her with the feedback and results she needed to finalize her mock-ups.

Over the 2013 Thanksgiving break, she came across the Stanford Design Challenge and worked feverishly on her entry.

“Learning about the Stanford Design Challenge was one of the best things that has ever happened to me,” Yao said.

She submitted her tableware design against 52 other teams from 15 countries, emerging as first place in the competition in April 2014.

“It felt like winning the lottery!” Yao said. “It validated the work that I had put in developing the set.”

Over the next year and a half, Yao’s life would become a whirlwind.

She started a crowdfunding campaign with her partner, Dennis Lin, in October, which has since become fully funded.

Additional tweaks and modifications went into the final design during promotional tours before it entered preproduction in May.

Now entering September, Yao is preparing to send her finished product into the hands of caregivers across the globe.

Along this entire journey, she has never lost sight of what inspired her from the start: her grandmother.

“I was devastated when she passed away before I graduated, and before I could show her the design that she inspired,” Yao said.

She admits, though, that her design will help others with Alzheimer’s and similar ailments, and that was what helped keep her going.

“I am dedicating this tableware set to the memory of my grandmother; it will be my last gift to her.”

As for the future of Eatwell, Yao said they are considering new pieces for the set, in addition to a line specifically for children.