Both were killed Wednesday morning while doing live broadcast

“The most radiant woman I ever met,” in the words of a colleague.

Photographer Adam Ward was 27. Engaged to be married. Vivacious and funny, the sort of person you never saw without a smile, as one college friend said.

On Wednesday morning, Parker and Ward, both employees of Roanoke, Virginia, TV station WDBJ, were shot to death while doing a live report from a shopping district near Moneta, Virginia. The person they were interviewing, Vicki Gardner, executive director of the Smith Mountain Lake Regional Chamber of Commerce, was shot in the back and underwent surgery.

WDBJ General Manager Jeff Marks said the two were “the kindest and nicest people” at the station. He was not aware of any connection between them and shooter Vester Flanagan, a former WDBJ reporter whom Marks said was fired two years ago. (Court documents from a discrimination lawsuit that Flanagan filed against the station said that Ward filmed him as he was being dismissed.)

“Why were they the targets and not I?” Marks said. “What do you do? Do you imagine that everyone who leaves your company under difficult circumstances is going to take aim?”

A reporter who cared

Parker was a native of the southwest Virginia area, having grown up in Martinsville, about 50 miles south of Roanoke. In a YouTube video by her station, she said she aspired to be a doctor or a pharmacist growing up.

“As a journalist, I get to cover those fields, so it’s close enough,” she said. 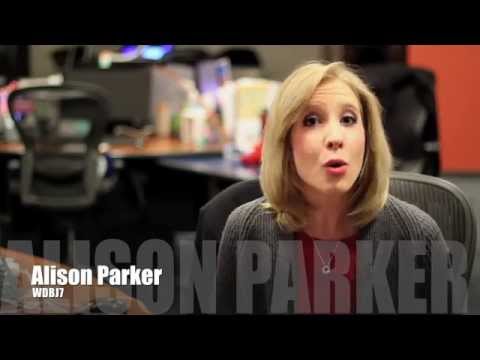 Parker graduated from James Madison University in 2012 with a bachelor’s degree in media arts and design, honing her journalism chops as a reporter and editor for the student newspaper, The Breeze.

“Alison was our bright, shining light, and it was cruelly extinguished by yet another crazy person with a gun,” her father said in a statement. “She excelled at everything she did and was loved by everyone she touched. She loved us dearly, and we talked to her every single day. Not hearing her voice again crushes my soul.”

Reporter's anchor boyfriend: She was radiant

Chris Hurst, an anchor at WDBJ, was in a relationship with Parker. After meeting her, Hurst told his mother, “Mom, I’ve finally found my teammate and my partner.”

The two moved in together in August and were saving up for a wedding, he told CNN’s Chris Cuomo. He has not watched the video of the shooting.

“I’m trying to find the strength that she always said that I had inside of me. It doesn’t feel like I have it right now,” he said.

Professionally, Parker was ambitious, Hurst said. “She was fierce. She was tenacious.”

Seth Kovar, a former WDBJ employee who now works at CNN, described Parker as someone “on her way.”

“Alison is just awesome. She’s beautiful and funny and talented,” he said. “I had no doubts that she would be a big-time anchor one day.”

Those who knew Parker said she was warm, generous and caring. Journalist Becky Blanton met Parker after moving to Roanoke in 2013 for a job in health care public relations. Parker helped her find freelance work, sharing personal and professional contacts without hesitation.

“She welcomed me with open arms, that immediate sisterhood. That’s the way she was with everyone,” Blanton said. “She was a networker in the truest sense; she tried to hook people up so everyone benefited.”

Those attributes carried over to her reporting, Blanton said. Parker often reported on the Chamber of Commerce – as she was doing the day she died – with a knack for finding the human stories in business news.

“She cared about her stories and took a genuine interest in what people said,” Blanton said. “She would look for personal details and ask the questions others didn’t ask.”

In her station biography, Parker said she liked to “whitewater kayak, play with her parents’ dog Jack, and attend community theater events.”

Parker shared her life with viewers through her Facebook page, regularly posting her stories as well as pictures and video from family vacations and kayaking trips. Recent posts showed her in dance classes preparing for a fund-raiser in the style of “Dancing With the Stars.”

She was equally enthusiastic about her job, sharing behind the scenes photos from shoots. WDBJ anchor Kimberly McBroom called Parker a “rock star.”

“You throw anything at that girl, and she could do it,” McBroom said.

Parker appeared on CNN last year to report on a snowstorm in the Roanoke area. Deon Guillory, a former colleague, said you could see her effervescent personality in that clip.

“You can even see her smiling in the snow. That was the kind of person Alison was,” he said.

‘He loved what he was doing’

Photographer Adam Ward joined WDBJ after graduating from Virginia Tech in 2011 with a bachelor’s degree in communication.

Kovar, the former WDBJ employee now at CNN, described Ward as a genuine good guy, a straight shooter and a huge sports fan.

“Adam is the hardest-working fella I had the (pleasure) to work with,” he said.

Photographer Adam Ward had been with the station since 2011.
Adam Ward Facebook Page

Those who knew Ward from Virginia Tech said he was funny and outgoing with a great sense of humor.

“Adam was a delightful person. He worked hard – you could tell he loved what he was doing,” said Virginia Tech professor Robert Denton, who taught Ward in classes and worked with him as a guest broadcaster at WDBJ.

“He wasn’t afraid to pitch in and do whatever was necessary for the broadcast. He did whatever was needed with a smile and with grace. He was simply a very nice young man and very professional.”

Larell Reynolds, a former WDBJ employee who worked with Ward, remembered him as a “funny goofball.”

“He had such a positive outlook on life, and he was so determined to put a smile on your face,” Reynolds told CNN.

Ward was recently engaged to Melissa Ott, a morning show producer at WDBJ, according to Solina Lewis, a journalist who said she was a friend of fiancée.

I knew Adam Ward as the sweet guy who gave great bear hugs and was always willing to help. All my love, Alison and Adam @WDBJ7

“He was an incredible person, a great journalist and would have been a great father and husband,” Lewis said in a statement posted on @Breaking911.

She recalled a time Ward came over to help her set up furniture.

“They were just the most amazing couple. They were getting married next year and wanted to have a family, and they would (have) made the best parents together,” Lewis told CNN.