This is the second child for Clarkson and husband Brandon Blackstock

"That was not planned," she said of her announcement

Singer Kelly Clarkson announced during a show at the Staples Center in Los Angeles that she’s “totally pregnant.”

This will be baby No. 2 for Clarkson, 33, and husband Brandon Blackstock.

The surprise announcement came Wednesday night after Clarkson broke down while singing “Piece by Piece,” a song about her relationship with her dad.

“I wasn’t planning on announcing. … Totally pregnant,” she gushed.

“That was not planned,” she later added. “I just didn’t want you to think I was crazy or something. Honestly, I’m so hormonal today. Nothing’s wrong. Everything’s great.

“I haven’t vomited yet.” 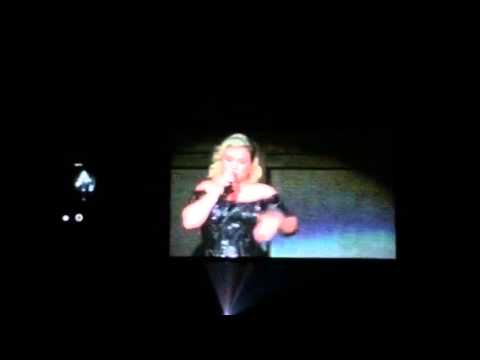 The Staples Center wasted no time in sharing the news with the world, saying this might be a first for the venue.

“We think that is a first for an artist to announce that she is pregnant during a show from our stage! @kelly_clarkson #PieceByPieceTour,” the tweet said.

We think that is a first for an artist to announce that she is pregnant during a show from our stage! @kelly_clarkson #PieceByPieceTour

Clarkson married Blackstock, a talent manager and father of two, in October 2013. Their daughter River Rose Blackstock was born in June 2014.

The singer shot to fame in 2002, winning the inaugural season of the music talent show “American Idol.”

She’s gone on to become one of the pop music’s most recognizable artists, with hits that include “Stronger,” “Since U Been Gone” and most recently (and perhaps, presciently?) “Heartbeat Song.”