By Katia Hetter, CNN
Published 12:43 PM EDT, Thu August 13, 2015
Link Copied!
Ad Feedback
This cat, originally named Corey, took social media by storm due to his resemblance to "Star Wars: The Force Awakens" star Adam Driver. Within a few days, he was adopted and renamed Kylo Ren, the name of Driver's character in the movie.
courtesy monmouth county spca
Grumpy Cat, also known as Tardar Sauce, is perhaps the most well-known cat on the Internet. Celebrities as diverse as Anderson Cooper and Jennifer Lopez have taken pictures with her.
David Livingston/Getty Images
Owner Mike Bridavsky and celebrity cat Lil Bub at the screening of "Lil Bub & Friendz" during the 2013 Tribeca Film Festival in New York.
Michael Stewart/WireImage/Getty Images
Misao, 88, and her odd-eyed cat Fukumaru in Japan. Misao found the stray cat when he was little. Misao's granddaughter, photographer Miyoko Ihara, documented the friendship between the Misao and Fukumaru.
Miyoko Ihara/Rex/REX USA
Venus, a cat with unusual genetic traits, appeared on NBC News' "Today" show. Her face is half black, half orange. Her eyes: one blue and one green.
Peter Kramer/NBC/NBC NewsWire/Getty Images
Waffles, a Scottish Fold, next to a portrait of her during the South by Southwest festival at Haus of Bacon on March 13 in Austin, Texas.
Gary Miller/Getty Images
Keyboard cat is an Internet meme.
youtube.com/chuckieart
Monty is a rescue cat who was born without a nasal bridge bone. He sneezes a lot because of the birth defect, but otherwise he's quite healthy.
Mikala Fuglesang
Henri, le Chat Noir, in a scene from the video, "Henri 2, Paw de Deux," by William Braden. The cat video won the Golden Kitty Award at the Walker Art Center's Internet Cat Video Festival in 2012 in Minneapolis.
William Braden/AP
Sam the cat has become an Internet sensation because of the two black markings on his head, which make him look like he has eyebrows.
Rex Features/Rex/REX USA
Colonel Meow at the Internet Cat Super Group holiday event at Capitol Records Tower in 2013 in Los Angeles. A Himalayan-Persian crossbreed, he held the Guinness World Record for cat with the longest fur.
David Livingston/Getty Images
Honey Bee is a blind cat from Animals Fiji, an animal veterinary service. Here, Honey Bee rested on the backpack of Jonathan Ursin, husband of Sabrina Ursin, who took the photograph.
blindcathoneybee/Facebook
Lazarus, a sick and malnourished kitten, was rescued in 2012 from the streets of Johnson City, Tennessee, by a student at East Tennessee State University. He was given to Cindy Chambers, a special education professor and animal lover. With medical attention and care, Lazarus became healthy. His Facebook page was created to raise awareness that animals (and people) with disabilities can be great contributors to people's lives if given the opportunity.
Cynthia Chambers
Cats at the harbor of Aoshima Island in the Miyazaki Prefecture in southern Japan on February 25. On this remote island, felines outnumber humans six to one.
THOMAS PETER/REUTERS/LANDOV
Nala Cat, a female Siamese-tabby mix, is a star on Instagram with more than a million followers.
nalacat.com/Lisa Scarsi
Hamilton, dubbed the "Hipster Cat," has a white marking under his nose that looks like Salvador Dali's mustache. He was rescued from a shelter by comedian Jay Stowe after being abandoned in San Francisco. The moggie has many followers on Instagram, and landed a T-shirt deal with clothing retailer The Mountain.
Jay Stowe/Splash News
Maru, the cat sensation in Japan with millions of views for nearly 300 videos since 2007, has three books and a calendar, among other swag for sale.
mugumogu/AP
Oskar the Blind Cat, along with other famous Internet cats, starred in a holiday music video "Hard to Be a Cat at Christmas" in 2013.
Bret Hartman/AP Images for Friskies
Nyan Cat, a YouTube video updated in 2011, has been viewed nearly 200 million times.
youtube.com

Corduroy, 26, lives with his humans in Sisters, Oregon

Corduroy has lived with Ashley Reed Okura of Sisters, Oregon, since he was a kitten and Okura was 7 years old.

Corduroy has lived with owner Ashley Reed Okura of Sisters, Oregon, since she was 7 and he was a kitten.
Courtesy Guinness World Records

“The secret has been allowing him to be a cat – hunting and getting plenty of love!” Okura said, according to a Guinness statement. “Growing up on 160 acres in Oregon, I allowed Corduroy to roam the ranch freely, so he always gets lots of exercise.”

Corduroy must have good genes: His brother, Batman, was Ashley’s brother’s cat, and that feline lived to be 19. But he also exercises and gets plenty of outdoor time.

“It’s truly amazing to have picked Corduroy out from a litter when I was almost 7 years old and still have him in my life today,” Okura said.

This isn’t Corduroy’s first time in the winner’s circle. He was named oldest living cat in 2014 but was replaced by Tiffany Two, who lived to be 27 years, 2 months and 20 days. Corduroy reclaimed the title after Tiffany Two’s passing.

Neither is the oldest cat ever. That’s Crème Puff of Austin, Texas, who lived 38 years and three days and died August 6, 2005. 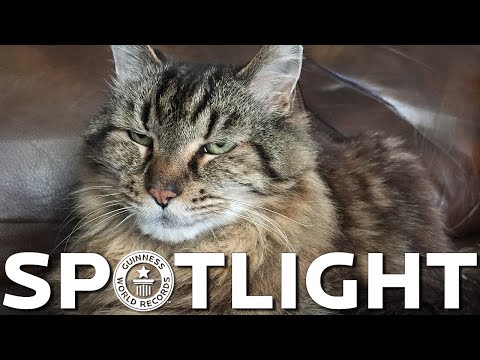 Meanwhile, there is no Guinness-approved “oldest living dog” at the moment, Guinness spokeswoman Kristin Ott said.

Applications for the title are welcome, she says, adding that the dog must be at least 21 years old.