Obama returns sister’s favor, plus other highlights from his Kenya trip

He didn't shy away from crucial issues such as corruption, gay rights and tribalism

After years of anticipation, President Barack Obama finally visited his father’s native Kenya, made history and captivated a nation.

Obama’s two-day trip ended Sunday, but the buzz did not.

The visit was personal yet political; short yet filled with family and presidential commitments. It was unlike any other – not just for him, but for a nation that considers him a long-lost son.

Kenyans are still basking in his tough-love message and the impact of having ties to an American leader. As Obama continues his tour of the continent in nearby Ethiopia, here are five highlights from his Kenyan trip:

He is the leader of the freestyle

In between bilateral talks, Obama immersed himself in some Kenyan culture. At a state dinner Saturday night, he busted some moves with Kenyan band Sauti Sol, performing the lipala, a popular dance among the nation’s youths. Obama held his own and did not disappoint on the dance floor, where he was joined by President Uhuru Kenyatta. 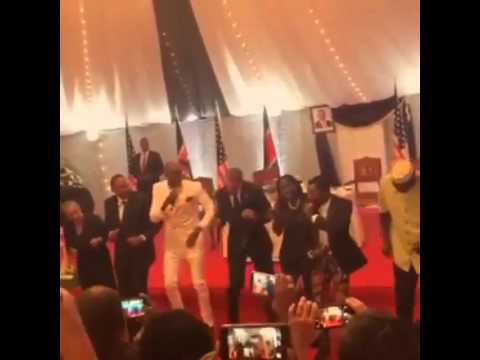 He also used Swahili words and local slang at every possible opportunity. “Hawayuni!” he greeted a delighted crowd in one instance, a popular street slang for “how are you guys!”

He alternated between personal and practical

While Obama spoke proudly of his heritage, describing himself as a “Kenyan-American” President, he did not shy away from addressing crucial issues in the nation such as corruption, gay rights and tribalism.

“Every shilling that’s a bribe could be put in the pockets of someone doing an honest day’s work,” he said.

On the treatment of women, he did not mince words.

“Treating women as second-class citizens is a bad tradition – it’s holding you back,” he said.

He also condemned the lack of gay rights in a nation where homosexuality is punishable by years in prison, describing it as “wrong, full stop.” Unswayed, Kenyatta responded by making it clear that gay rights are a “nonissue” in his country.

Decades after Obama got a ride in his sister’s car during his first trip to Kenya, he returned the favor by having her ride in his armored car when he arrived in Nairobi.

Back then, he landed in the nation decked out in jeans, a backpack and no means of transportation, according to his book, “Dreams from My Father.” As President, it was a far cry from that, arriving in a suit, a private jet and a guarded convoy. Both the President and his sister, Auma Obama, have described riding in her Volkswagen that broke down numerous times when he first visited.

A ramshackle car was the least of their worries Friday night as they took off for a family dinner in the car that carries the President.

“Twenty-seven years later, what did he do? He rode with me in the Beast,” his sister said Sunday, using the nickname for the car that carries the President. The two share a father but have different mothers.

Even his presidential jet has namesakes

How do you honor a man considered a native son? By naming your sons after him – and hoping they follow in his footsteps.

Some Kenyans born over the weekend were given names honoring Obama, including some named AirForceOne Obama.
SAUL LOEB/AFP/Getty Images

That’s what some women did over the weekend in Kisumu, where the President’s father, Barack Obama Sr., hails from.

At least six children born while the President was in the country were named Barack Obama, local media reported. Two were even named after the presidential jet.

“I have decided to call my baby AirForceOne Barack Obama so that we can all remember Obama’s visit to Kenya,” one of the mothers, Lucy Okoth, told The Daily Nation.

His visit was marked by many firsts