Huckabee takes it to church on Sunday, addresses racial tensions

Former Arkansas Gov. Mike Huckabee took to the pulpit of an African-American church in rural South Carolina on Sunday to address race in America.

Huckabee’s service came in the wake of the racially motivated massacre in Charleston, when a white man shot and killed nine African-Americans during a Bible study.

There was handshaking and baby kissing and a strong religious message within Huckabee’s speech, which marks a broader effort by the former governor to widen his appeal among African-American voters.

On Thursday, the Huckabee campaign released a short video titled “Reconciliation,” which featured clips Huckabee speaking in 1997 during the 40th anniversary of the Little Rock Nine, when Little Rock Central High School was desegregated.

“Government can ensure that we share schools and streets and lunch counters and buses and elevators and theaters,” he said at the time. “But let us never forget that only God can give us the power to love each other and to respect each other and to share life, liberty and the pursuit of happiness.” 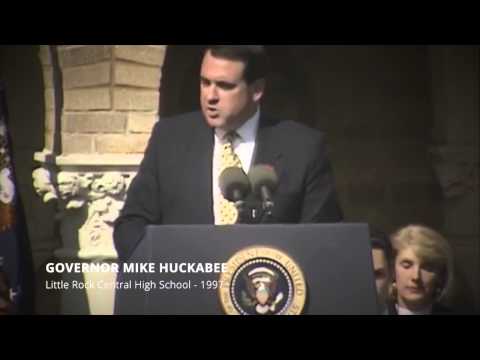 Huckabee’s southern roots provide him with a likely edge over some of his GOP rivals when it comes to winning African-American votes. In a 1998 CNN exit poll, the governor won 48% of the black vote in his re-election campaign, something he has proudly brought up before in South Carolina.

He’s also no stranger to the Palmetto State, as he has heavily focused his primary campaigning in South Carolina – and Iowa – since his announcement at the beginning of May. It’s no surprise why: The two states are known for their religious conservative values and according to a recent CNN/ORC poll, Huckabee is the top pick of Evangelical voters.

But Sunday, he said he did “not to come be a presidential candidate,” but to assume the comfortable position leading a congregation.

Rock Hill’s pastor Leon Winn wove rhetoric of love and honesty into an introduction of the former governor, addressing the separation of black and white people here in Manning.

“I had the hair-brained idea to bring the black and the white churches together,” said Winn, a Republican who unsuccessfully ran against Democratic Rep. James Clyburn in 2014.

The congregation laughed and cried as the fresh memories of the Charleston shooting were broached numerous times.

“We get all wrapped up in the things that divide us. Are you left or are you right? Are you Democrat or Republican? We didn’t come here to scream at each other,” Huckabee told the sweltering crowd. (Many congregants, despite the air-conditioning, still found themselves using hand-held fans to keep the heat at bay.)

He preached a message of reconciliation with God and neighbor, pointing to a “pride problem” that has swept over America.

“It’s when we elevate ourselves above those around us and we don’t understand that God doesn’t elevate anybody over anybody,” he said.

Speaking of the Charleston murders, Huckabee said he was impressed how the families of the victims reacted to the slayings.

“The reaction in Charleston was not lead by people who wanted revenge. They had to ask for God’s grace. I saw the family members. I felt ashamed of myself because, I’ll be honest with you, that was not my first reaction,” he said.

Sunday’s “faith and freedom Sunday service” marks the first time he’s campaigned at an African-American church so far in the 2016 race, but it won’t be his last, according to Hogan Gidley, the governor’s senior communications adviser.

After nearly an hour and a half, Pastor Williams concluded his service “Like it or not, black folks, you need white folks. White folks you need black folks. We need each other. If we don’t come together we’re going to collapse as a nation.”

The congregation answered his call with a resounding, “Amen.”

CORRECTION An earlier version of this story misidentified Leon Winn.