Photos: Live Aid: Where are they now?
Dan Kitwood/Getty Images/File
Bob Geldof —
The success of Live Aid led to co-founder Bob Geldof receiving an honorary knighthood in 1986. He has continued his activism while investing time and money in TV production businesses. Geldof, now in his 60s, is shown here in 2014 urging Scots not to break away from the British government.

Around 162,000 fans attended in two countries, and an estimated 1.5 billion watched on TV

Thirty years ago at Live Aid, Thomas Dolby felt convinced he would “screw up the gig.”

Hey, no pressure. He was only backing up David Bowie in front of a worldwide audience.

For those who don’t remember, the July 13, 1985, concert amounted to a global response to an Ethiopian famine that had killed tens of thousands of people. It followed recordings intended to raise awareness of the crisis, including Band Aid’s “Do They Know It’s Christmas” and USA for Africa’s “We Are the World.”

That July day, at least 70 acts performed for 16 hours straight at London’s Wembley Stadium and at JFK Stadium in Philadelphia. When the last notes faded, the event reportedly raised an eye-popping $245 million, according to MTV.

It was the concert where Bono saved a woman from being crushed by waves of frenzied fans. Phil Collins performed at both venues thanks to a supersonic airliner. And Tom Petty showed his bad-boy side by flipping the middle finger to someone offstage.

Dolby – already famous for his hit “She Blinded Me With Science” – had been asked to form a band quickly as backup for Bowie at Wembley. But as the concert date drew near, preparations were a bit rough around the edges.

The band had only rehearsed five or six times. Also, it had never practiced the full set – all four songs – back-to-back.

When Bowie took the stage to a roaring crowd of 72,000 – and about 1.5 billion watching via satellite – Dolby was at the keyboards. He remembers kicking off “TVC15” in a “piano vamp style that’s not really my thing.” Nonetheless, things appeared to go smoothly.

Dressed in a suit and tie, Bowie owned the stage, dancing arm in arm with a backup singer and then seamlessly moving into “Rebel Rebel” and “Modern Love.”

“The song I was worried most about was ‘Heroes,’ ” Dolby said. Bowie had chosen his classic singalong anthem as a fitting end to his performance. It was one of Dolby’s favorites, which made the pressure even more intense.

The song I was worried most about was “Heroes.”

When the time came to play the first notes of the song, “I just basically went into automatic pilot and just stared past Bowie’s back toward the hordes of screaming fans,” Dolby recalled.

“A song like that, when it’s completely in your consciousness, you don’t really have to think about it, you just have to be in the moment.”

The song just played itself, he said. “My fingers did the walking.”

Speaking over the music, Bowie thanked the band for getting together “so quickly to do this show for me. I’ll be forever in your debt.”

The fact that Bowie was “willing to take a chance with a young band with very little rehearsal was a ballsy move on his part,” Dolby said. “I was just very proud that it was us.” 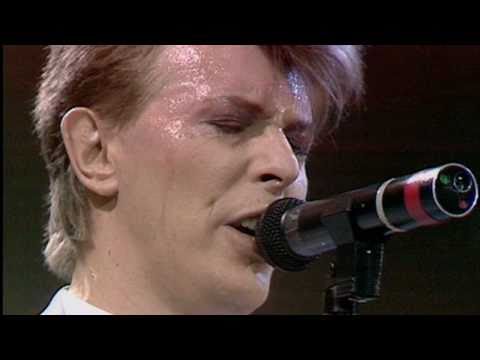 For much of the next three decades, Dolby focused on writing, performing and recording music, including video game and film scores.

Now, at 56, the guy who became famous with a song about a professor who was “blinded with science” has become a professor himself.

Pretty impressive for a guy who left school at 16 to work in a fruit and vegetable shop and never attended university. And not bad for a musician who says he doesn’t “really read or write music.”

“I hope my approach will sort of rub off on them,” Dolby said.

Dolby credits much of his career path to an innate curiosity that has always driven him toward “cutting-edge technologies that people haven’t really figured out yet,” he said.

Experimenting with digital do-it-yourself music production gave him the confidence to move on to DIY filmmaking. In 2013 he directed, shot and edited a documentary called “The Invisible Lighthouse.”

“That’s the kind of confidence that I try to instill in my students at the university.”

This summer Dolby is back home in England writing a memoir to be published next year, which includes his Live Aid stories. The anniversary attention is prompting him to reflect on the concert’s place in music history.

“I wasn’t at Woodstock, but if I heard somebody say that it was just another ’60s rock festival, then I would point out there was nothing run-of-the-mill about it,” he said. “It meant an awful lot to a lot of people who would disagree. And I think that would be true of Live Aid as well.”