It is named for Wendy Sloboda, a dinosaur hunter who found the spot where its bones lay

Wendy Sloboda’s knack for finding fossil beds got her name immortalized – and has handed science a missing link in dinosaur evolution.

Five years ago, she came across bones poking out of a hillside in southern Alberta, Canada.

Paleontologists began digging and discovered remains of a previously unknown species of horned dinosaur – related to the famous triceratops – with a scientifically interesting nose horn.

They named the dinosaur Wendiceratops pinhornensis. The first word is a Latinized verison of “Wendy’s horned-face,” and the second refers to the Pinhorn Provincial Grazing Reserve, where she found it.

She has earned the nomenclature honor many times over.

“Wendy Sloboda has a sixth sense for discovering important fossils. She is easily one of the very best dinosaur hunters in the world,” said David Evans of the Royal Ontario Museum.

Evans and Michael Ryan from the Cleveland Museum of Natural History published their research on the Wendiceratops this week in the scientific journal PLOS ONE. 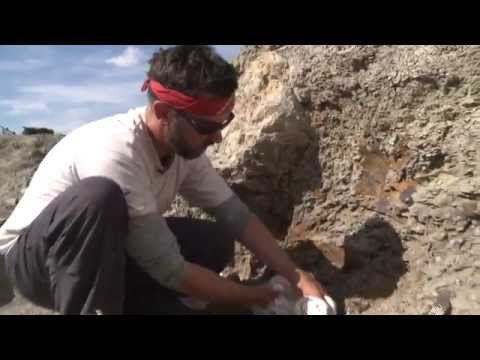 Excitement about W. pinhornensis centers on that horn.

It has a medium length and is blunt. That may not sound like a flashy weapon, but the important part is that, judging from the age of the fossil’s remains, the species lived 79 million years ago. That makes the horn the earliest known “tall nose horn.”

It marks the beginning of the evolution of nose horns in the ceratopsian group of species, which includes the triceratops.

A quick reminder of what triceratops is: In the classic sandbox battle between toy dinosaurs, it fights the tall giant-jawed Tyrannosaurus rex.

The triceratops is the one with horns sticking out of its face that it jams into the T. rex’s belly. It has a broad neck collar – or frill – and a rhino-like body. (By the way, paleontologists have no evidence that those two creatures actually did battle outside of childhood fantasies.)

The triceratops was a herbivore, not a meat-eating hunter.

But the horns on the Wendiceratops and related species may have had an effect on evolution – perhaps not as a weapon for battles to the death, but for contests to win mating partners.

“The locked horns of two Wendiceratops could have been used in combat between males to gain access to territory or females,” Ryan said.

During the last few million years of the Cretaceous period, leading up to the extinction of dinosaurs about 65 million years ago, species in the ceratopsian group evolved rapidly, developing many variations of their facial horns.

Some had bigger horns in their faces, others broader frills with more horns on them. The Wendiceratops’ frill was wide and ornate.

“The number of gnarly frill projections and horns makes it one of the most striking horned dinosaurs ever found,” Evans said.

For those who want to see it for themselves, paleontologists have built a full-size model based on the fossils and exhibited it at the Royal Ontario Museum in Toronto.