The Clintons: wrangling reporters with rope since 1992

Aides to the former president used a rope to keep photojournalists from getting too close to the Clintons on a public street during a 1992 parade, a technique campaign staffers with Hillary Clinton’s 2016 bid reprised this weekend. 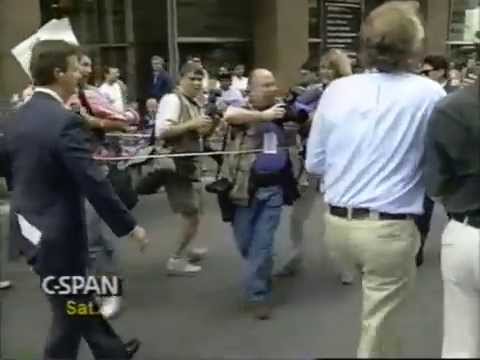 The 1992 footage unearthed by the Republican National Committee and posted online on Tuesday shows a half-dozen press photographers bumping into each other in a tightly-bound corral formed by several aides and a rope.

Fast-forward to July 4, 2015 and two of Hillary Clinton’s advance staffers pulled out a rope to keep reporters about 10 yards from the former First Lady and Secretary of State as she marched in an Independence Day parade in New Hampshire. Campaign aides said they pulled out the rope to keep the press scrum from obstructing the view of early state voters attending the parade.

Hillary Clinton made light of the incident during a gaggle with reporters on Tuesday in Iowa.

“Is that the equivalent of a rope we have up here?” Clinton said to one of her aides as she walked up to the microphone.

“I think it should come down. I don’t want anybody to be…stressed,” Clinton said with a smile.