Date and battleground yet to be decided, but MegaBots suggest a year to make necessary preparations

At six tons and controlled by two pilots, the Mark 2 fires 3-pound paint cannonballs at speeds of over 100 miles per hour (160 kilometers an hour). The company plans to create a futuristic sports league where the giant robots batter each other into submission.

The video, featuring co-founders Matt Oehrlein and Gui Cavalcanti, challenges the only other company in the world that can give its mechanic behemoth a run for its money. Suidobashi Heavy Industry has created the Kuratas, a towering, single-pilot robot, which is already commercially available. 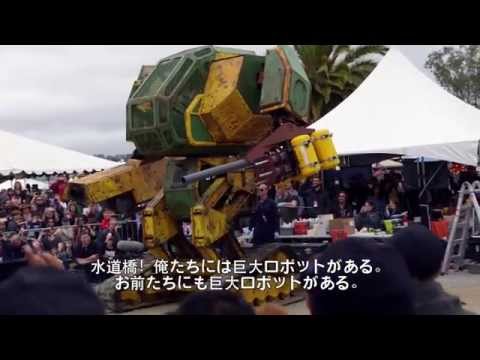 The MegaBots challenge gives both teams a year to make the modifications necessary to engage in robot-on-robot combat.

“It’s interesting, I’ll give them that,” Kurata said in a video response posted on YouTube and the company’s Facebook page on July 5. “But come on guys, make it interesting! Just building something huge and sticking guns on it… it’s… super-American.” 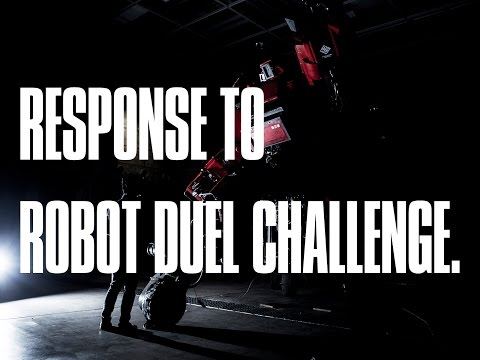 The Kuratas, named after its designer and launched in 2012, way ahead of MegaBots’ Mark 2, weighs a little less that its American counterpart at 4.5 tons and features (presumably nonlethal) Gatling guns, controlled by an advanced targeting system and a full heads-up display (HUD).

Referring to a rich – if fictional – history of giant robots, or “mecha” as they are known in Japan, Kurata explained that the country’s pride was at stake. “We can’t let another country win this,” he said. “Giant robots are Japanese culture.”

Piloted robots have been a staple of Japanese animation (anime) and comics (manga), for decades in Japan and feature household names like “Gundam” and “Evangelion.”

The phenomenon then spread to popular culture abroad with cartoons like “Voltron” – originally from Japan but a hit in the U.S. – and movies such as 2013’s “Pacific Rim.”

Kurata clearly feels that there is a patriotic element at stake – and has a way to ensure Kuratas’ dominance.

He suggests that robo-primacy would only emerge if the two robots were able to slug it out in “melee combat.”

“I want to punch them to scrap and knock them down to do it,” Kurata said.

No venue or date for the epic fight has been set, but there will be no shortage of sci-fi fans who will be interested.

And if they want to recreate the battle themselves? They better have deep pockets. A “starter kit” for Suidobashi’s Kuratas is listed on Amazon’s Japanese site. It’s currently unavailable but has previously been priced at ¥120,000,000 ($978,000).