U.S. women in the World Cup

Lloyd bags a hat trick, and Lauren Holiday and Tobin Heath score the other goals

Soccer is a tough sell in America because it’s a low-scoring game. So goes the conventional wisdom.

Because what happened inside the BC Place Stadium in Vancouver, British Columbia, on Sunday ought to make believers out of even the ultra-apathetic.

Caption:VANCOUVER, BC - JULY 05: Lauren Holiday #12 and Carli Lloyd #10 of the United States celebrate with teammates after Lloyd scores her second goal against Japan in the FIFA Women's World Cup Canada 2015 Final at BC Place Stadium on July 5, 2015 in Vancouver, Canada. (Photo by Rich Lam/Getty Images)
Rich Lam/Getty Images
video

Carli Lloyd: We just made history

This wasn’t just redemption for losing to Japan in the 2011 finals.

This wasn’t just a World Cup win for the first time in 16 years.

“It doesn’t feel real. We just made history,” said Carli Lloyd, the midfielder who set some records of her own.

But before we get to any of that, let’s start at the very end.

If the lasting image of the 1999 World Cup win is that of Brandi Chastain taking off her shirt and lifting her arms in triumph, the iconic moment of the 2015 may be this:

Forward Abby Wambach rushing to the stands after the game and kissing her wife, Sarah Huffman, as the crowd of 53,341 awwed.

This is soccer for the new century.

Lloyd was on a mission.

With all the buzz centering on Wambach, Alex Morgan and Sydney Leroux, Lloyd had been an afterthought going into the tournament.

Now, folks are joking her picture should be placed on the $10 bill, which is due for a makeover in 2020.

Not only did she score the winning goals against China in the quarterfinals and Germany in the semifinals, the No. 10 stung quickly and often on Sunday.

Within the first 16 minutes, she’d scored three times, in the third, fifth and 16th minutes of play – the earliest hat trick in the history of the Women’s World Cup. (The fourth goal of that mesmerizing early spell came from Lauren Holiday.)

The most jaw-dropping of Lloyd’s three was the last: a shot that sailed from near the halfway line, past the helpless Japanese goalie, Ayumi Kaihori, and into the net.

With her hat trick, Lloyd brought her total for the tournament to six goals. And she won the Golden Ball award for best player.

The never-say-die fight back

Four goals to zero, and still some 74 minutes left in the game.

If this were an SAT analogy question, you’d think it would be something like USA : Japan :: kitty : ball of yarn.

But Japan’s indefatigable never-say-die attitude is what made the rest of the game exhilarating.

It bounced back – twice.

Yuki Ogimi scored in the 27th minute, ending a U.S. streak that had gone unbroken since its first game of the tournament: 567 minutes in which it didn’t give up a goal.

Then came a second goal when the U.S. team played the ball into its own net in the 52nd minute.

But it wasn’t to be.

Not even when Japan brought in Homare Sawa, considered one of the best women players.

In that match, Sawa scored one of the greatest goals in soccer history just three minutes from the end of play. Japan then won the penalty kick shootout, 3-1. 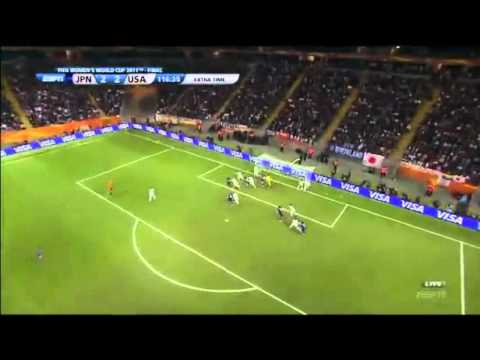 Not Sunday though, even though Japan toughed it out until the final whistle.

The U.S. was the superior team through and through. Not content with four, it scored yet another goal – an easy finish by Tobin Heath in the 54th minute.

It had had seven shots on goal to Japan’s four.

Much of the credit goes to the U.S. goalie, Hope Solo.

Her career has been a roller coaster ride both on and off the pitch, what with a domestic violence case, a 30-day suspension and her husband’s DUI.

But she delivered a standout performance Sunday, capping a strong tournament. She leaves Canada with the Golden Gloves, given to the best goalie of the competition.

.@VP congratulating the Best Goalkeeper in the World. #GoldenGlove pic.twitter.com/P3YX7grtyM

The Sunday win was a perfect finish for a Women’s World Cup where shenanigans off the field threatened to overshadow the awesome talent on it.

There was the controversy over synthetic turf, FIFA’s flippant comments about Alex Morgan’s looks, and, of course, the continuing saga of the soccer body’s beleaguered president, Sepp Blatter.

Blatter had the good sense to stay away Sunday. But many other luminaries were in attendance, including U.S. Vice President Joe Biden.

“World champs. The cup is coming back to the United States,” he tweeted after the game. “We’re so proud.”

Afterward, there was much celebrating in the U.S. women’s locker room.

No time for losers, because we are the champions...OF THE WORLD! #ThreeStars pic.twitter.com/trIffjREoG

On the Japanese side, the talk was all about Lloyd’s phenomenal performance.

At the 2012 Olympics in London, the U.S. had faced Japan. It was Lloyd’s two goals that earned the U.S. the gold.

This is how Japan’s coach Norio Sasaki summed up Sunday’s win: “She always does this to us.”