“Donald’s wife, Nancy, contacted us yesterday to say that Donald had passed away,” said Zarozny, whose company now sells the iconic pink flamingos. “I met both of them quite a few times, and Donald was just a very, very nice man – very creative and a nice person.”

Nancy Featherstone told the Sentinel & Enterprise that her husband had a lengthy battle with Lewy body dementia. He got sick years ago, but things got more difficult about two years ago.

“It’s a terrible disease,” she said. “You can’t do anything about it. But he fought it. He fought it to the best of his ability. He died with dignity.”

In addition to his wife, he’s survived by two children, Judith Nelson and Harold Featherstone.

Featherstone died one day before National Pink Flamingo Day, a day created in his honor in 2007 by Dean Mazzarella, mayor of Leominster, Massachusetts, to honor the 50th anniversary of the plastic flamingo’s creation in his town.

An art school graduate, Featherstone created the pink flamingo in 1957 as part of his job at Union Products in Leominster. Eventually, he became president of the company, from which he retired in 2000.

Union Products stopped making pink flamingos in 2005 and went out of business shortly thereafter, which could have been the end of the plastic bird. But Cado Co. acquired the rights to manufacture Union Products in 2010, and the bird lived. (Look for Featherstone’s signature on the bird to know you’re getting the real deal.) 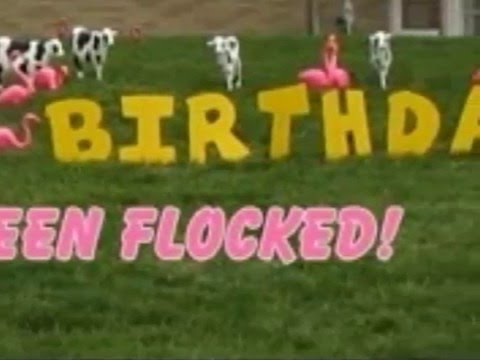 “Here in Leominster, it’s Pink Flamingo Day every day,” Mazzarella told Boston magazine after hearing of Featherstone’s passing. “But it’s just kind of ironic how within a day of his passing, it just so happens to be. He’d be thrilled.”

A notable contrast to the two-dimensional lawn ornaments that preceded them, the plastic pink flamingos became wildly popular in the late 1950s, selling for $2.76 a pair.

Though the 1960s saw a rejection of all things parental and plastic in favor of classier lawn decor, the 1970s welcomed back bad taste and schlock. When John Waters’ movie “Pink Flamingos” came out in 1972, the uncool bird was cool again.

In 1987, the governor of Massachusetts proclaimed the Massachusetts-born plastic bird “an essential contribution to American folk art,” wrote historian Jennifer Price in her book “Flight Maps,” which has a chapter on the flamingo. By 1998, the Los Angeles Museum of Contemporary Art was selling plastic pink flamingos for $19. The 2011 Disney film “Gnomeo & Juliet” had a pink flamingo character named “Featherstone.”

Flamingos still dot contemporary lawns across America, and there’s even a word for surprise plantings of the birds in the middle of the night: You’ve been “flocked.”

Featherstone won an Ig Nobel Prize for his creation in 1996. Improbable Research administers the award for achievements “that make people laugh, and then think.”

“Don Featherstone was a happy, kind, and thoughtfully imaginative man, who became famous for his goofiest, tackiest creations,” wrote Marc Abrahams, editor and co-founder of the magazine Annals of Improbable Research, father and master of ceremonies of the Ig Nobel Prize Ceremony and author of much of the Improbable Research website’s postings.

“It was ‘goofiest’ and ‘tackiest’ by Don’s own reckoning – he was a richly talented artist, but felt that, given the fame and financial security the flamingo brought him, he ought to publicly act as if he were interested only in making happy goofy, plastic art.”

Featherstone became a friend, attending many Ig Nobel awards ceremonies after his own, Abrahams said.

“Please think of Don, and raise a smile, whenever you see a flamingo, be it plastic or of some less physically durable species.”

Or, as an Improbable Research reader suggested, “Everyone please stand in your yard on one leg for a moment of silence.”