Is it time for an African superhero to save the day?

The year is 2025, the prosperous Lagoon City has been overrun by alarming skeletal drones and corrupt politicians. It bares little resemblance to the hometown Wale Williams left five years before. But the young Nigerian has bigger problems – his estranged but brilliant inventor father has disappeared. His pursuit of a parent will lead him to a nanosuit his father built, which provides him with superhuman abilities and a destiny to protect the city he loves.

“E.X.O: The Legend of Wale Williams” is the fast-paced, afro-futuristic graphic novel from Roye Okupe. A software and web developer by day and graphic designer by night, the passionate Nigerian has spent the last several years trying to bring his dream of a homegrown hero to life.

Okupe was born and raised in Nigeria but relocated to Washington D.C. at age 17 to study computer science at George Washington College. It was in the United States – the home of Marvel and DC Comics – that the young creative’s passion for cartoons and animations really developed.

“I grew up on the popular (comics) back home, like Superman, Batman, Teenage Mutant Ninja Turtles, Transformers, and I just fell in love with the concept of a superhero,” Okupe tells CNN. “I’ve always been drawn to them and I think the main reason is that there is so much negativity in our world.”

A homegrown hero is born

When Okupe finished college, he decided it was time to insert more diversity into the superhero world. By 2012 he founded Youneek Studios and Wale Williams and his alter-ego “E.X.O.” were born.

Okupe says: “I wanted people from around the world to relate to Wale just the same way that I grew up relating to Peter Parker and Spiderman – because he had issues in high school, and he had issues getting girls while trying to balance superhero powers.

“The reason we are drawn to superheroes isn’t necessary because of the color of their skin or where they are from but because of their backgrounds, their motivations and what they fight for. Creating a superhero from Nigeria, it was very important for me that I didn’t just make it where I would alienate anybody who wasn’t from the country.” 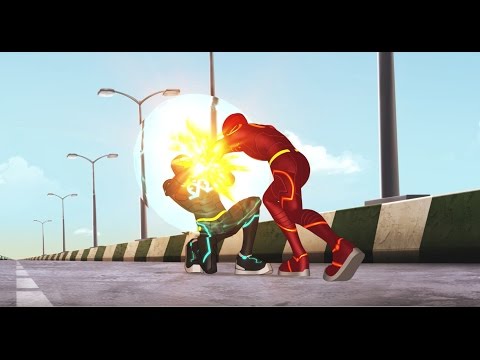 The original concept was for an animated cartoon, so he developed a seven-minute trailer to showcase his work. But after a year of shopping it to distributors and producers, Okupe was out of luck.

“A lot of people were afraid about taking a risk with a character that was from Africa because there was no fanbase to prove that this is going to work. I had people tell me, ‘you have a nice product. You might wanna change some of the characters around…’

“I would say ‘I respect your opinion but the reason why I do this is I grew up in Nigeria and I want to give the country a superhero. I don’t want to have to compromise what the vision was to make a quick buck.”

A platform for other artists

Refusing to let this be a nail in the coffin for E.X.O., Okupe decided to change tack. He turned the animation into a trailer for a graphic novel and collaborate with artists back home to help him color the world of Lagoon City and bring the graphic novel to life. He enlisted Ayodele Elegba as editor along with artist Sunkanmi Akinboye, Godwin Akpan (who designed the cover art) and Raphael Kazeem on colors.

“We have such a wealth of talent who are not getting the exposure they deserve. Most of the time when you hear news about Nigeria, it’s mostly negative things. I’m trying to show a different side of Africa that people are not regularly exposed to.

“When I decided to make E.X.O, I wanted to make a character that was very intertwined with technology because that is a big thing in Africa. The tech industry is going through an economic moment – I really wanted to shine a light on that and say ‘we are doing great things in Africa. There are tons of people in Africa and it’s really time that people pay attention to Nigeria and Africa as a whole.’”

Several months on and the book is now complete. The team made final tweaks to artwork, so Okupe had to find financing for publishing. Wanting to also show that there could be a huge fan community for a product like “E.X.O,” the resourceful designer decided to crowdfund the project.

“I had already paid the money for the artwork. All that was left was to raise money for printing so the goal was to get $3,500 to print 500 books.

“We hit that target in about two days and for the rest of the Kickstarter campaign we got $10,000. It was then that I knew this was the right path. Any failure I felt before – not getting the animation, getting rejected by so many distributors and producers, people telling me my idea is not going to work – it finally justified the fact I never quit on myself.”

The graphic novel is set to be the first in a trilogy and is now available to buy.

“I want that if I put my book beside a Spiderman or a Batman or Superman, I don’t want it to be like ‘oh yeah, that one is from Africa.’ We can also do something of great quality and put it out there for the world to see.”

Read the first chapter of “E.X.O: The Legend of Wale Williams” below.

Follow this link to read the rest of the first chapter of “E.X.O.: The Legend of Wale Williams”