By Michael Pearson, CNN
Published 8:29 AM EDT, Tue May 19, 2015
Ad Feedback
Joy Lofthouse, in an image from the BBC, got a chance to go up in a Spitfire again to mark the 70th anniversary of the Allied victory in Europe.
from BBC

92-year-old veteran gets to fly again

"It almost makes one feel young again," she says

This used to be her job, flying the iconic Spitfire fighter over Britain’s countryside.

Now, seven decades later, Joy Lofthouse got the chance to do it all over again. The 92-year-old veteran of Britain’s World War II-era Air Transport Auxiliary recently got the chance to go back up in one of the surviving Spitfires, and she even got to fly it for a bit.

“I’m incredible to be in a Spitfire again after so long,” she told the BBC. “I’m so lucky to be given a chance to fly in it again.”

Lofthouse’s role during World War II was to ferry aircraft from factories to Royal Air Force units across the country. Hundreds of men and women worked for the auxiliary, helping move dozens of different varieties of aircraft.

But it was the nimble Supermarine Spitfire that became the icon of the RAF during the Battle of Britain air campaign over England and which Lofthouse said other pilots would later look on her enviously for having flown.

She said in a 2011 interview with Focus Business Communications that bomber pilots who flew with her late husband often wanted to hear about her experiences with the plane during post-war reunions.

“They all say we’d have given our right arm to fly a Spitfire,” she said.

During her flight to commemorate the 70th anniversary of the defeat of Germany in World War II, Lofthouse said she was “excited but aware of my age.”

“It’s hard to describe the feeling, but it almost makes one feel young again,” she said. 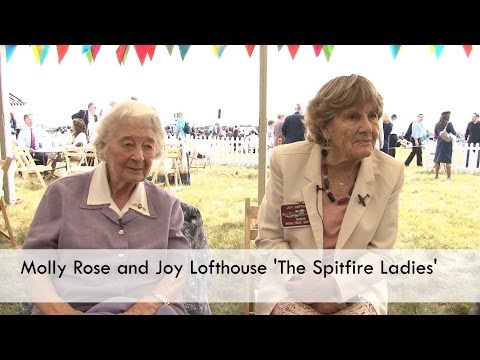