This robotic chimp could one day roam the moon

Could the next moon mission involve a small step for an ape, but a giant leap for all robots?

With renewed interest in moon exploration – in particular the remote possibility that deposits of helium-3, believed to be in greater concentration on the moon, could one day power nuclear fusion power plants on Earth – robots might be the ideal solution, especially to keep the costs down.

And a design from the German Research Center for Artificial Intelligence (also known as DFKI) in Bremen, Germany, has landed on the chimpanzee as its model for unmanned lunar missions.

DFKI hopes its design – called the iStruct Demonstrator and nicknamed “Charlie”- will capitalize on the inherent stability of the ape’s quadrupedal stance without losing the chimp’s versatility in climbing, grasping and moving over all types of terrain.

“We chose the ape because it allows us to study several locomotion modes,” DFKI researcher Daniel Kuhn told CNN.

“For example, they have quite good quadrupedal walking abilities but they can also perform stand- up motion and walk on two legs – their ability to do this is greater than other animals. This change in posture and walking form interested us,” he said.

Four-legged locomotion, Kuhn explained, might be stable – but for speed and agility on flat ground, bipedal walking has the edge. 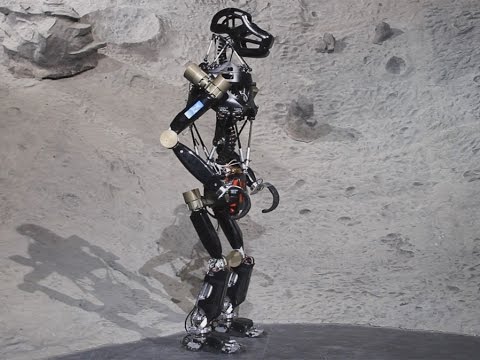 The chimp’s greatest asset is that it can choose which form of movement best fits the situation.

Founded by the German space agency DLR, the project has also built Lunar craters in a lab to test the prototype.

“In general, we are very happy with the results,” he said. “The robot can walk up and down slopes of up to 20 degrees.

Previously, most multi-legged robots have been equipped with single-point contact feet for the sake of simplicity in design and control.

However the robotic chimpanzee focuses on a sophisticated lomwer limb system that combines the torque and twist of the chimpanzee’s lower body.

And, like a real chimp, the robot’s feet and hands have multiple sensors and multiple points of contact.

When the environment improves, two legs allows you to get a better view over the field

The robot is also equipped with a distance sensor in the heel to anticipate the heel strike and two temperature sensors to compensate for the difference in temperature produced by its own electronics.

Its biggest advantage, however, comes from the fact that like a real chimpanzees, it has a spine.

“We have an actuated spine – one of the first ever built – and for us it was very interesting how the spine influences the motion of the legs,” Kuhn said. “We need much less activation for the knee – the knee can be much lower if we use the spine and it needs less force to move the robot.

“It’s strong enough to walk around and carry its own weight – and it can carry 20 to 25 kg of additional weight.” 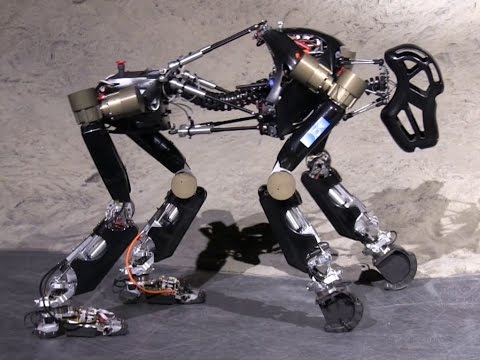 Because of the embedded electronics in the spine, the overall structure can be used as a 6-axis force-torque sensor, allowing it a range of movement that replicates human and animal mobility.

For those designing lunar robots, the list of specifications can be daunting.

Not only must a robot be able to see, drill, grind, collect and even sieve, it needs to get around a hostile environment in extreme temperatures and in a vacuum.

Robots also must offer the greatest strength and versatility for the least payload and have the ability to fix problems if something goes wrong.

With the moon 380,000 kilometers away, there’s little margin for error and Kuhn says it may take three or four generations before the lunar chimp is completely space proof.

“You have to use different technologies - you can’t use the same electronics that you use on Earth; they have to be space qualified and space proof.

“What we are doing is working on integrating more redundancy into the robot. If something goes wrong then we can rely on different actuators.”

Space and other animals

The chimpanzee is not the only animal that is being studied by DFKI as a potential model for a lunar robot. Also on the drawing board are plans for a lunar mantis and a lunar scorpion.

Also at the prototype stage, the advantage of this type of locomotion, Kuhn says, has great potential.

“What you have is an animal that can stand on four legs, giving it stability, but can use its front two legs to manipulate objects,” he said.