Courtesy Zuriel Oduwole
But for the time being, Zuriel, seen here striking a pose with humanities students from the University of Pretoria, is going to stick to what she knows -- film-making and her next project will combine her love of education and documentaries.
Courtesy Zuriel Oduwole
"I still have a lot to learn, after all I'm only 12 but what's next is to create another documentary called "Follow the ball for education," she says. "I can't say too much about it just yet but it's going to be about how I took two soccer balls to six countries across three continents to get people talking about girl's education during football season."
Courtesy Zuriel Oduwole

Zuriel Oduwole is a 12-year-old filmmaker

To date, she has interviewed 14 heads of state

Most kids want to go out and play when they finish their homework early. But Zuriel Oduwole isn’t “most kids.” When she gets ahead of her work, she packs her camera and microphones, jumps on a plane and interviews presidents instead.

Born in California to a Nigerian father and a Mauritian mother, Oduwole is often described as “the world’s youngest filmmaker.” Aged 12, she already has four documentaries under her belt – all of which focus on African issues.

It all started three years ago when Oduwole decided to enter a school documentary-making competition with a film about the Ghana revolution.

Just who has Zuriel Oduwole interviewed?

After this first foray into filmmaking, Oduwole was bitten by the director’s bug and quickly wanted to make more movies. She turned to the web to find the tools she needed and got involved in the entire filmmaking process.

“As I edit, produce, set up and write the scripts for my documentaries, I have to learn a lot of things,” says Oduwole, who is self-taught and uses online editing and voice software.

Her second outing, “Educating and Healing Africa Out of Poverty,” looked at the creation of the African Union in 1963. She followed it up in 2014 with her movie “Technology in Educational Development.”

But it was her most recent project that catapulted her to international recognition. Released late last year, “A Promising Africa” (watch trailer below) is the first in an ongoing series which will profile five African nations, starting with her father’s homeland of Nigeria.

“I’ve interviewed 14 heads of state and a few of those include the President of Tanzania, Liberia, Kenya, South Sudan, Nigeria and Cape Verde, to name a few,” says Oduwole. “I’ve also been able to interview business leaders like my friend Mr Aliko Dangote.”

To date, “A Promising Africa” has received a limited-release on the big screen in five countries – Nigeria, Ghana, South Africa, UK and Japan.

The young trailblazer, who was named by Business Insider as one of world’s 100 most powerful individuals last year, delightedly recalls seeing her film on the big screen and walking the red carpet in Lagos. 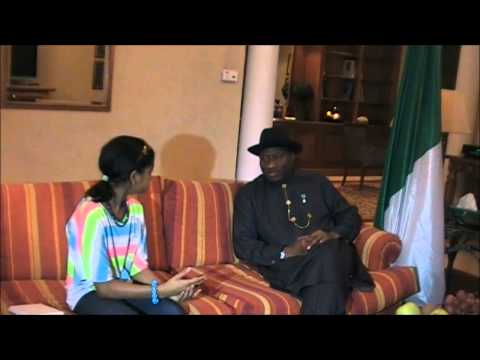 “I’m hoping that when people see these documentaries they will see Africa is full of positive things – not just the things that are on the news like war, famine, disease,” she says.

“I want to show them there is a lot more to Africa than what we see on the news – there’s dancing, music, great culture and more.”

‘Dream Up, Speak Up, Stand Up’

Although she’s just 12, Oduwole, who is home-schooled through an online Californian system, is already a 9th grader – two years ahead of the rest of the kids her age.

Her mother, Patricia, has a full-time job as a computer engineer, whilst her father, Ademola, has taken time off his work in the tourism sector to help organize a lot of what Zuriel and her three other siblings are doing. “There really is a lot happening in our household but somehow we make it work,” says Patricia Oduwole.

In addition to her documentary work, Oduwole has also become something of an education advocate. She travels to different African countries and the diaspora on a regular basis to talk to students about the importance of education.

So far, through her side project “Dream Up, Speak Up, Stand Up” she says she’s had the opportunity to talk to 21,000 children in nine countries.

“Girl’s education is important because on the African continent, where there are not as many resources, the boys are the first [to get an education],” says Oduwole.

“The boys go to school and get an education while the girls stay at home. And those girls aren’t educated and have fewer options in life when they get older.”