Facing prom without a date, a high school junior decided to ask his gay best friend

When high school junior Jacob Lescenski couldn’t find a date for prom, he thought he’d ask his best friend to go with him.

And that’s when it got fun.

After seeing Martinez’s wistful social media posts not having a date for prom, Lescenski told CNN he came up with an idea and a clever rhyme that’s now gone viral.

Guess who just got asked to prom by @JacobLescenskii pic.twitter.com/eDrTRkX7fp

Lescenski enlisted friends into poster-making and went to pop the question at school. Martinez was selling prom tickets when he came across a poster being unraveled in the hallway.

“You’re hella gay, i’m hella str8, but you’re like my brother so be my d8” read the poster.

It was the “sweetest, coolest thing that has ever happened,” Martinez told CNN.

Initially, Lescenski was anxious thinking how people might judge his actions but decided to go forward anyway. “If it made Anthony happy, and fulfilled his dream of going to prom with a guy, and had a date to prom myself, nothing else mattered,” Lescenski told CNN.

By putting his friend first, he won over the Internet. “What a truly wonderful display of friendship!” tweeted Bridg-it, a New York City-based anti-bullying program. “Kudos for shining a light on a better path,” wrote another fan. “This Guy knows the real mean of FRIEND,” wrote another.

Totally #AWESOME @anthonyseXC@JacobLescenskii YOU ARE MY HERO of the week! How lucky Anthony is to have a friend like you!#Kindness4Smiles

A New Kind of Prom Date 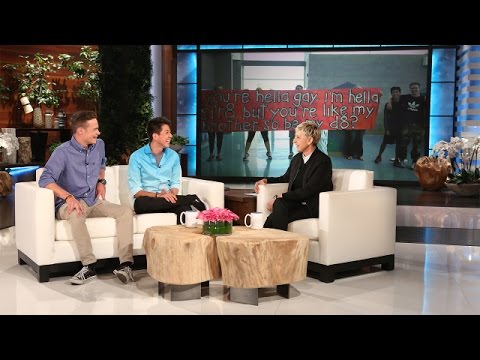 And so did Miley Cyrus.

Martinez says his friend has done more than make him happy. Jacob has “made a huge change in the world somehow,” adding that their involvement in student council has been just about making great change in the lives of many, and in ways they would never expect.