Faarrow: Why this Somali sister act should be on your next Spotify playlist

By Lauren Said-Moorhouse, for CNN
Updated 6:12 AM EDT, Wed April 15, 2015
Ad Feedback
Courtesy JM Dayao
Faarrow is a Somali sister act made up by singer/songwriters, Iman (left) and Siham Hashi.
Courtesy JM Dayao
The pair were born in Mogadishu, Somalia, but fled to Canada at a young age.
Courtesy Faarrow/Instagram
Iman says: "When we want to get to a happy place and dance, we'll play Lionel Richie and all the old school stuff because it reminds of us of when we came to Canada and our family."
Courtesy Faarrow/Instagram
The pair returned to the continent to shoot a music video recently. Here they are pictured at the Maasai Market in Nairobi, Kenya, with their mom. While the pair have a clear goal in mind, Iman says her older sibling has final say sometimes. "Even though (Siham's) a year and a half older than me, she looks smaller but she's definitely the boss. And I'm always trying to do stuff and she'll shut me down." And here's some proof in this Instagram blooper...
Courtesy PRETTYPUKE
The pair say they'd love to return home and have tried several times in their capacity as spokespeople for ARC Relief. Siham explains: "We actually had a conversation about it with Angelina Jolie while we were in Switzerland and she was going to go on the same trip. She was like "Oh you guys are going? I'm going too!" But there was a bombing and the trip got canceled."
Courtesy Faarrow/Instagram
She adds: " Recently, we had opportunities with VICE and Diesel. We did a campaign for them for their fashion line -- Diesel Edun. And VICE were going to shoot our music video in Africa anywhere we wanted. Obviously we wanted to go to Somalia but it was way too dangerous and they didn't want to put the crew at risk. We ended up shooting our video in Kenya (pictured) but Somalia was our first choice. I feel like it's not fair that we can't do what we love in our own country for fear of our lives."

A fusion of hip-hop, world pop and Afrobeats, they are currently finishing debut album

Laying down tracks for their debut album in the recording studio in Los Angeles, Iman Hashi, 25 and her sister Siham, 27 could not be further from their hometown of Mogadishu. The sisters were born in the Somali capital but were forced to flee after war broke out in 1991.

Along with their parents, the girls relocated to Canada as refugees where during their teens they discovered a passion for music.

Heading south to LA by way of Atlanta, the singing sisters with a bold flair for fashion are now embarking on a musical journey, gearing up to unleash their Afro-pop sound to the world.

CNN’s African Voices caught up with the sister act – known collectively as Faarrow (combining the translation of their names into English – Iman means “Faith” and Siham means “Arrow”) to talk about music, aspirations and Somalia.

CNN: Hi guys, thanks for chatting with me today. What are some of your musical influences?

Iman: We love Michael Jackson, Lionel Richie – stuff my mom would listen to and play – and the Spice Girls. We used to die for the Spice Girls. I love new artists now but I don’t know if it’s a nostalgia, but I remember … my mom used to pump whatever – Mariah Carey, Whitney Houston.

CNN: You are working on your debut album now – how’s that been?

Siham: We’ve been working with Elijah Kelley – he’s actually an actor. He was in “Hairspray,” “The Butler,” and most recently he was in the George Lucas animation, “Strange Magic.” That’s what he’s more known for but his first passion is music. He’s an incredible producer, writer and singer. I just felt like he was always the missing piece. He brought everything together.

CNN: So now that you’ve found your “missing piece,” how would you describe your sound?

Siham: Our music before was experimenting with Afrobeat sounds but now it’s more of a fusion (of what) we are inspired by. It’s pop with undertones of hip hop and rhythmic African percussion. It’s a fusion of everything.

CNN: And do you guys write the songs as well?

Siham: The entire album was pretty much (written and produced) by me, my sister and Elijah. And when we signed we already had a lot of those songs already done. Warner Brothers Records is really great in that way that they already loved what we were doing and let us do our own thing. 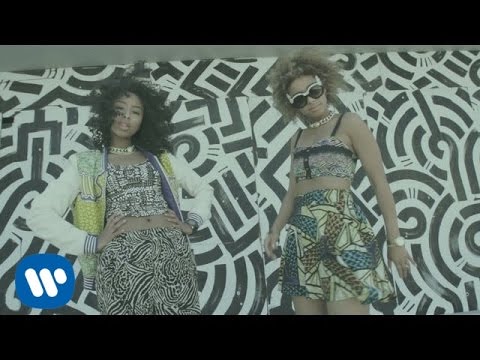 CNN: What are you listening to right now?

Siham: Oh my God, there’s so many!

Siham: I really love this new song – I don’t know if Iman is going to agree with me – but his name’s LunchMoney Lewis, it’s called Bills; I love it.

CNN: As well as your music, you both work with the U.N. High Commissioner for Refugees (UNHCR) – how did you start your humanitarian work?

Iman: Ever since we were kids we wanted to help Somalia, we always talked about it. But we were like “what can we physically do?”

We were doing some research and we called our mom and she said ‘You know you still have family over there. There’s a refugee camp in Kenya and your great uncle and his kids live in a refugee camp.’ And we did some research about Dadaab refugee camp, it’s a massive camp that has taken in Sudanese refugees, Somali refugees, Rwandan refugees – pretty much anywhere there was a conflict. Everybody fled to Dadaab. In the beginning (it was) pure advocacy talking about it on Twitter and Facebook.

CNN: But then you decided to “up your game” as it were…

Iman: Yes, then we started a non-profit and we’d do small benefit concerts in Toronto and in San Diego – wherever there was a big Somali community we would do outreach but all we had was our singing, working with UNHCR in a capacity as a spokesperson. We headlined World Refugee Day at the Kennedy Center, as well as the Nansen Awards twice in Geneva. We felt like this platform of singing – the bigger it gets, the more we can do.

Siham: We obviously love fashion so we wanted to do our own socially conscious brand so we’ve been making these bracelets and necklaces called “Wish Creatively.” Wish stands for “Women Internationally Selling Hope.” We wanted to do a socially conscious brand where we sell these bracelets where it goes back to projects in Kenya or Somalia with women providing them with a sustainable income.

It’s our purpose to be a voice for our country.

CNN: So what’s next for you two?

Siham: We’re actually in the mixing process right now. We still have a few (tracks) to finish up but the majority of the album is pretty much done. We want to turn it in as soon as possible so they can put together a rollout plan and get ready for the first single to drop.

Iman: I don’t feel like we ever lost that feeling like we’re creative spokespersons for our generation as well as for Somalia. I feel like now because we followed our dreams it’s like ‘they’re not just refugees anymore.’ We don’t have to become doctors so we can one day give back to Somalia and help rebuild – it’s such a beautiful dream but not ours. In our culture, anything creative is not really respected or appreciated. But I feel like now but even with our new deal we’re still trucking along. I feel like we inspire people.

Read this: Nigerian soul singer Nneka is back!