NEW: At least two people are dead as a result of storms in Illinois, officials say

Geraldine Schultz, 67, and Jacklyn Klosa, 69, were neighbors in the rural Illinois hamlet of Fairdale.

On Thursday night, their close-knit community was ravaged by a tornado that shredded homes and ripped trees bare of leaves and most limbs. Only the thickest branches remained.

One woman was pulled from the rubble where her home once stood. The other was found in her tub, where she tried to ride out the storm.

“Apparently she had no basement,” DeKalb County coroner Dennis Miller told reporters. “She told her sister last evening that she was going to the shower to take cover.”

They died in the “most devastating spots in this town,” said Kirkland Community Fire District Chief Chad Connell.

Before and after tornado damage

The National Weather Service Friday preliminarily rated the tornado as an EF-4 – the second most powerful category, with winds between 166 and 200 mph.

“We hope and pray that that is all,” Gov. Bruce Rauner said Friday. “We’re very blessed that more people were not hurt.”

Ogle County Sheriff Brian VanVickle’s house in Rochelle, Illinois, was a mound of rubble when he arrived at dawn Friday.

Fortunately, his wife and children were out of town when the tornado struck Thursday night. VanVickle was working at the time, he said. His brother-in-law and sister-in-law, who live across the street, were also out. Their home was leveled as well; at least 30 houses were destroyed by the twister. Nearly 50 homes sustained significant damage.

“The family is safe,” the sheriff said. “That’s all that matters. By God’s grace, nobody was home. … Things can be replaced.”

Even his dog survived: It was found in the ruins, resting atop the mattress of VanVickle’s daughter.

Storm chaser: A lot of damage for many miles

Connell said rescue teams have been ferreting through piles of rubble by hand. Cadaver dogs were assisting in the search.

“We think we have everybody accounted for,” DeKalb County Sheriff Roger Scott said. “Right now we have no specific person that’s not accounted for.” 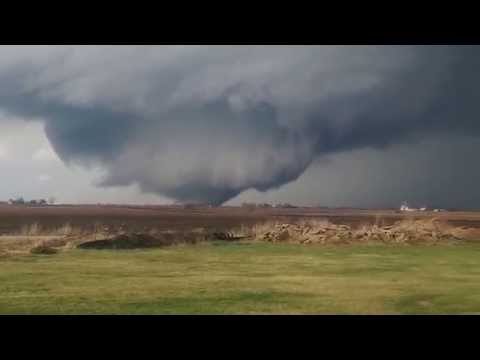 In her 40 years in Rochelle, Cathy Olson had never seen a tornado that big.

“I saw the top of the funnel cloud, and it was absolutely massive,” she said.

She watched the hulking gray twister grind past her town Thursday, tearing up its fringes. Officials said most of the damage occurred from 6 to 9 p.m.

Rochelle was fortunate. In nearby Kirkland, debris was so thick on the roads, responders searching for trapped residents could not yet assess the damage or injuries, fire officials said.

On Thursday, a video surfaced on YouTube of a massive twister barreling across an open field, barely missing farmhouses and barns. Images of the funnel turned up elsewhere on social media.

As many as 14 tornadoes were reported in the rural Midwest on Thursday. A large and dangerous twister tore across fields in Iowa. And a twister touched down 70 miles outside St. Louis.

Hailstones the size of tennis balls plummeted down on Ashton, Illinois.

It could have been worse as severe tornado damage dotted a path not far from the dense populations of Chicago and Rockford, the state’s third-largest city. The tornado cut a 22-mile path through Ogle County, according to disaster management coordinator Tom Richter.

Firefighters search for unaccounted people on Friday, April 10, the day after a tornado swept through Fairdale, Illinois. Geraldine M. Schultz, 67, was killed Thursday night when the tornado tore through town, according to Dennis Miller with the DeKalb County coroner. It was the only death reported in two days of tornado touchdowns.
Jon Durr/Getty Images
gallery

North of Rochelle, a tornado took away a local favorite restaurant: Grubsteakers. “It’s kind of one of your little greasy spoon restaurants,” said Eric Widick, who drove up in his truck to help out.

“We’re a community. If one person is in need, we’ll all be there for them.”

People were inside when the storm quashed Grubsteakers and turned over a semitruck parked outside. No one was killed or seriously injured, Widick said. A patron who found shelter in a restroom was trapped inside for about half an hour.

People had been eating at Grubsteakers for some 25 years and will miss it, Widick said.

In Rochelle, the tornado flattened some of the homes of Olson’s friends.

A safe distance away from it, at her mother’s house, she had to think about her husband, Chet, who was re-elected mayor of the town of about 10,000 people the previous day. He’d have a job ahead of him.

“I have not been able to get a hold of him,” Olson said, “but I know he’s in touch with the sheriff and is safe,” she said.

VanVickle told journalists late Thursday that the tornado had spared life and limb aside from some people whose injuries were easily treatable.

Only foundations remained of some homes, said storm chaser Dan Gottschalk. “You can hear the hissing everywhere from where the structures used to be,” he said.

Lindsey Clark, a reporter from CNN affiliate WREX-TV in Rockford, said rescuers had to pull trapped people from a home in the Rochelle area.

VanVickle was newly elected sheriff of Rochelle on Wednesday. On Thursday, the storm took his house and his sister-in-law’s. “I’ve got the clothes on my back,” he said.

On Friday, VanVickle attended a news conference with Rauner, who praised the sheriff.

“He’s been serving around the clock – along with his entire team – with no sleep,” the governor said. “Thank you for your service.”

It was the first tornado VanVickle had ever seen in his county.

“I’ve lived here all my life, am the fifth generation in the county. My mom said this is the first time she’s ever seen a tornado.”

He said he is thankful the National Weather Service warned one could come. Sirens provided residents with 27 minutes of lead time. That saved lives, he said.

“We didn’t have a single fatality in the county,” said VanVickle, standing in front of the ruins that were once his home. “You count your blessings and you thank God – even though you see what’s behind you – thank God that everybody’s safe.”

For the time being, VanVickle and his family will stay with relatives.

“The nice part is we live in the Midwest and everyone takes care of their own,” he said.

The weather service warned of a “particularly dangerous situation.” People across the Midwest should be on alert for severe weather. Tornado watches ran out early Friday. Severe thunderstorms are possible Friday afternoon or evening from parts of the mid-Atlantic region to the Gulf Coast states.