Who is Trevor Noah? ‘Daily Show’ fans will soon find out

By Lisa Respers France, CNN
Updated 4:32 PM EDT, Mon March 30, 2015
Ad Feedback
Photos: The changing face of late night
Getty Images
James Corden's résumé isn't limited to "The Late Late Show," which he started hosting in March. He's a Tony winner and movie actor ("Into the Woods"), and CBS just announced he'll be hosting the 2016 Tony Awards. As "Late Late Show" host, Corden replaced Craig Ferguson, who left the show in December 2014. The face of late-night TV has changed considerably in recent years as many longtime hosts have moved on to other things. Here's a look at the leading players.
Photos: The changing face of late night
Courtesy Comedy Central
Comedian Trevor Noah succeeded Jon Stewart as host of "The Daily Show" in September.

You may not know it, but comedian Trevor Noah actually made a bit of history even before being named to succeed Jon Stewart as host of “The Daily Show.”

The 31-year-old South African comic has made only a few appearances on that show since popping up as a correspondent in December, but he’s better known within the world of standup comedy.

In 2013, Noah became the first African comedian to perform on “The Tonight Show with Jay Leno.”

Trevor Noah on CNBCA - The Tonight Show with Jay Leno

He’s been on the cover of Rolling Stone in South Africa, where he’s extremely popular. He’s joked about being the son of a black African woman and a white Swiss man who met when interracial relationships were illegal in South Africa.

“My mom would be arrested. She would be fined, and still she was like ‘ooh, I don’t care, I want a white man, ooh,’ ” he once told an audience at London’s Soho Theater during his standup show “The Racist.” “And my dad was also like, well, you know how the Swiss love chocolate.”

Why mixed-race comic was ‘born a crime’

Race, identity and ethnicity have figured in prominently in his act.

Are Americans ready for a foreign 'Daily Show' host?

Because of his parents’ then-illegal relationship, he joked, “In the streets, my father couldn’t walk with us. He would walk on the other side of the road and wave at me like a creepy pedophile. And my mom could walk with me, but every time the police went by, she would drop me. I felt like a bag of weed.”

Noah has said in his act that he lost touch with his father for several years because of apartheid.

In 2012, he told NPR that he was fascinated by how Americans discuss race.

“I got to Baltimore, and I was expecting … because urban means built up and new, you know,” he said. “So I got there, and I was, ‘Whoa, it’s not as urban as people told me.’ … But it’s very black. I’ll tell you that much.”

Noah told CNN’s “African Voices” in 2013 that after finding success in his homeland – where he starred on a soap opera, hosted his own radio show and was the subject of the 2012 documentary “You Laugh But It’s True” – he moved to the United States for a year to try to raise his profile.

He returned to his country with new material shaped by his time spent in the States, he said.

“Comedy is really getting quite popular in South Africa,” Noah said. “It’s moving from the bastard child of entertainment into the mainstream, which is very good. I think the reason it’s doing so well is because South Africans need to laugh and South Africans want to laugh.”

Noah has moved to the U.S. permanently and told Newsweek, “I’ve always wanted to be a comedian in the world. I don’t want to be labeled a South African comedian.”

On “The Daily Show,” he debuted as a correspondent with a bit titled “Spot the Africa,” which juxtaposed modern-day South Africa and the United States. 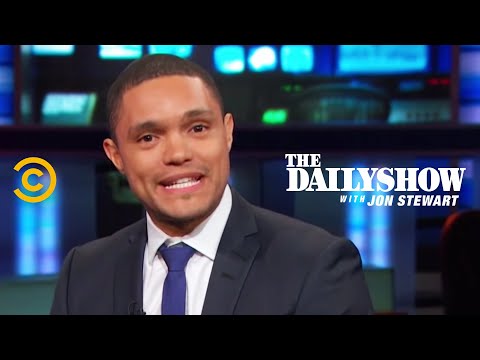 What remains to be seen is whether what the Guardian has described as “his combination of terribly polite, butter-wouldn’t-melt stage presence and biting, often brutal gags” will translate into success on “The Daily Show.”