The sound fire extinguisher looks like a conventional one

But it blasts out a low hum that makes flames disappear

Firefighters may be snuffing blazes with deep-toned sound, if a new device invented by two engineering students in Fairfax, Virginia, catches on.

Viet Tran and Seth Robertson’s new fire extinguisher looks a little like a conventional one, but instead of a compressed air tank spewing out chemicals, theirs has a loudspeaker the size of subwoofer drumming out sound waves.

It’s not much to listen to, just a low hum, but when pointed at flames, it makes them vanish.

In a way, it’s like blowing the fire out, because sound waves are basically multiple, regular blasts of air.

Pump Up the Bass to Douse a Blaze: Mason Students' Invention Fights Fires 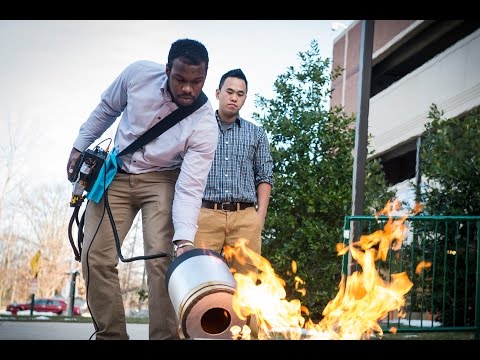 When they started out, Tran and Robertson thought high-pitched tones would do the trick. It didn’t work.

“It’s low-frequency sounds – like the thump-thump bass in hip-hop that works,” Tran said.

No mess, no smell

With water, powder, foam and chemicals, there are already many means of dousing a flame, so it may be hard to imagine what sense it makes to add a new one.

But putting out a blaze usually leaves behind a big mess – chemical residue in every cranny, or gushing water that ruins what flames failed to devour.

Sound waves are much cleaner.

Tran envisions the new extinguishers starting out small, perhaps mounted over stovetops to put out grease fires. Or astronauts could deploy them.

“In space, extinguisher contents spread all over. But you can direct sound waves without gravity,” Robertson said.

Robertson and Tran appear to have beaten a defense agency to the punch, according to George Mason University, where the two developed the extinguisher as a sort of senior year final exam.

The Defense Advanced Research Projects Agency has run experiments on blasting out fire with sound but don’t appear to have developed something as handy as an extinguisher. 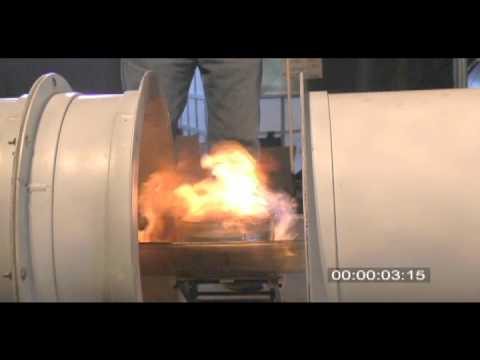 But when they started out, Tran and Robertson’s idea scared off classmates, who though it was a sure ticket to an F. Professors were leery of supporting them.

Then Professor Brian Mark agreed to mentor them, though he first thought the project would fail. “Some students take the safe path, but Viet and Seth took the higher-risk option,” he said.

Now, the university is helping the two apply for a provisional patent.