By Henry Hanks and Emanuella Grinberg, CNN
Updated 7:37 PM EDT, Sun March 22, 2015
Ad Feedback
ABC Studios/IMDB.com
"Scandal" has brought Kerry Washington tons of recognition, including a two Emmy nominations for outstanding lead actress in a drama. She has built her career steadily in TV and films such as ...
Cort/Madden Production/IMDB.com
Washington plays street-smart teen mom Chenille Reynolds opposite Julia Styles in the 2001 film "Save the Last Dance."
Touchstone Pictures/IMDB.com
She stars with Chris Rock the following year in the action-comedy "Bad Company."
Theo Wargo/WireImage for Miramax Films/Getty Images
Washington appears opposite Wentworth Miller in the 2003 big-screen adaptation of Philip Roth's "The Human Stain."
Universal Pictures/IMDB.com
Washington wins acclaim for her role as Ray Charles' wife in the Oscar-nominated 2004 film "Ray." Jamie Foxx received an Academy Award as best actor for his performance in the title role.
40 Acres & A Mule Filmworks/IMDB.com
Washington and Dania Ramirez, left, play a lesbian couple who wanted to pay Anthony Mackie to help them have a baby in Spike Lee's 2004 film, "She Hate Me."
Carin Baer/ABC/Getty Images
The actress guest-stars as Chelina Hall in a handful of episodes of "Boston Legal." Here she appears in the series with James Spader, foreground, and Page Kennedy.
Neil Davidson/HO/Courtesy of Fox Searchlight Pictures/AP
In 2006, Washington appears as Kay Amin, dictator Idi Amin's youngest wife, opposite Forest Whitaker and James McAvoy in "The Last King of Scotland."
Screen Gems/IMDB.com
Washington and Patrick Wilson play a married couple in the 2008 crime drama "Lakeview Terrace."
SimonSays Entertainment/IMDB.com
The actress wins raves for the 2010 independent film "Night Catches Us."
Lionsgate/IMDB.com
Washington stars as Kelly/Blue opposite Hill Harper in "For Colored Girls," Tyler Perry's 2010 film of Ntozake Shange's play.
DreamWorks SK/IMDB.com
Few probably remember her 2012 role opposite Eddie Murphy in "A Thousand Words."
Weinstein Co./IMDB.com
Washington reunites with Jamie Foxx as married slaves in 2012's "Django Unchained."
34th Street Films/IMDB.com
The actress goes for laughs with Craig Robinson in the 2013 comedy "Peeples."

Kerry Washington calls out marginalized communities for turning against each other

"We have been pitted against each other," she says

“Scandal” star Kerry Washington stood up for same-sex rights in a fiery speech Saturday night that brought a cheering crowd to its feet.

Washington made the remarks in her acceptance speech at the 26th Annual GLAAD Media Awards, where she received the Vanguard Award for promoting equality.

In addition to calling for more representation of the LGBT community in Hollywood, she also called out marginalized communities for turning against each other, encouraging them to come together.

“Women, poor people, people of color, people with disabilities, immigrants, gay men, lesbians, bisexuals, trans people, intersex people: we have been pitted against each other and made to feel like there are limited seats at the table for those of us who fall into the category of ‘other,’” she said.

“As others, we are taught that to be successful, we must reject those other others, or we will never belong.”

“We can’t say that we believe in each other’s fundamental humanity and then turn a blind eye to the reality of each others’ existence and the truth of each other’s hearts. We must be allies. And we must be allies in this business because to be represented is to be humanized. And as long as anyone, anywhere is being made to feel less human, our very definition of humanity is at stake and we are all vulnerable.”

Kerry Washington Accepts the Vanguard Award at the #GLAADAWARDS 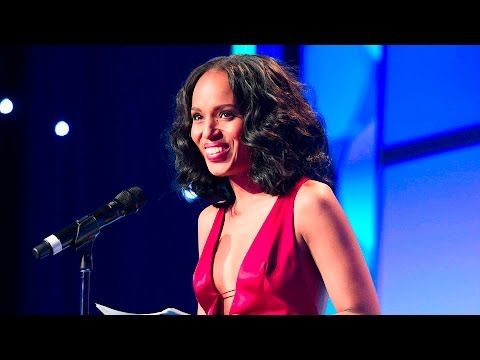