By Lisa Respers France, CNN
Updated 9:46 PM EDT, Tue March 24, 2015
Link Copied!
Paul Walker, a star of the "Fast & Furious" movie franchise, died in a car crash on November 30, 2013. He was 40. Here's a look at his career through the years.
Tim P. Whitby/Getty Images Europe/Getty Images
Walker with Tyrese Gibson, Michelle Rodriguez and Ludacris in "Furious 7," which had mostly completed filming when Walker died. Many fans got emotional upon seeing Walker onscreen in the movie, which earned $143 million its first weekend.
Universal Pictures
Walker's role as Brian O'Conner in the "Fast & Furious" franchise (here with Vin Diesel in the sixth film) helped make the actor a star.
Universal Pictures
Walker and Jordana Brewster -- who played his love interest, Mia, in the films -- in "Fast 5."
Universal Studios
Kevin Rankin and Walker appear in "Pawn Shop Chronicles," a 2013 film about a missing wedding ring that sets off a wild goose chase.
Anchor Bay Films
Walker also had a starring role in the 2013 film "Hours," about a man trying to keep his daughter alive after Hurricane Katrina.
Lionsgate
The actor was part of a band of thieves in the 2010 movie "Takers."
Screen Gems
Brooklynn Proulx and Walker in the 2008 film "The Lazarus Project."
Sony Pictures/Everett Collection
Walker, left, and Barry Pepper were U.S. Marines in the 2006 drama "Flags of Our Fathers."
DreamWorks/Everett Collection
Walker appears in the 2005 action film "Into the Blue," which also starred Jessica Alba.
20th Century Fox
Tyrese Gibson took over for Diesel opposite Walker in 2003's "2 Fast 2 Furious."
Universal/Everett Collection
Walker appeared in 2001's "The Fast and the Furious," the first movie in the franchise.
universal studios
Walker, center, appeared in "Skulls" with Leslie Bibb and Joshua Jackson in 2000.
Universal/Everett Collection
Walker and Freddie Prinze Jr. co-starred in the popular 1999 teen film "She's All That."
Miramax/Everett Collection
Walker's first major role was opposite Reese Witherspoon in the 1998 film "Pleasantville."
new line cinema

Co-star Walker was killed in 2013 during break in filming

Vin Diesel has been paying tribute to his friend Paul Walker as fans eagerly await the release of “Furious 7.”

On Monday, he revealed a very personal way that he has remembered Walker: by naming his daughter after the late actor.

I hear babies crying, I watch them grow. They'll learn much more, Than I'll ever know. And I think to myself, What a wonderful world...

Diesel told “Today’s” Natalie Morales that he and girlfriend Paloma Jimenez named their baby girl Pauline. The actor said he felt the presence of Walker in the delivery room with him.

“There’s no other person that I was thinking about as I was cutting this umbilical cord,” Diesel said. ” I just … knew he was there.”

Diesel has been honoring Walker a lot lately and recently had some special words at an advance screening of “Furious 7.”

The actor spoke told the Los Angeles audience last week that “this was a very very personal and important film for us.”

“This was a labor of love. It was in some ways the hardest movie I ever had to do,” Diesel said. “Because the relationships that you see on film are so real. When the tragedy happened, I lost my best friend. I lost my brother.” 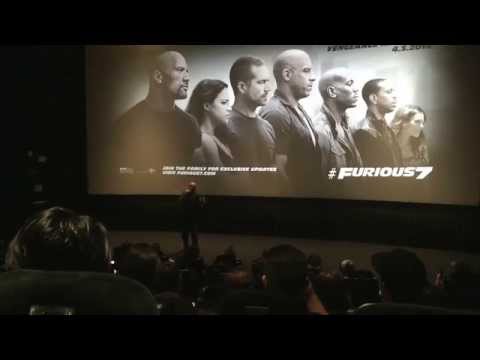 Walker, 40, was killed in a car crash in November 2013 in Southern California while taking a few days off from filming the seventh “Fast and Furious” movie. The film was finished using previous footage and stand-ins including Walker’s two brothers.

The producers have said they don’t plan on killing Walker’s character off in the new movie.

“Furious 7” debuts in theaters on April 3.