Microsoft co-founder Paul Allen says he has found the wreck of a long-lost World War II Japanese battleship near the Philippines.

The philanthropist posted images on Twitter that appeared to show the Musashi, once one of the two largest warships in the world. The discovery was made aboard his superyacht, the MY Octopus, as part of an expedition that Allen launched.

The search has taken Allen and his team of researchers more than eight years.

The images and video were taken by an unmanned submersible deployed from the vessel. 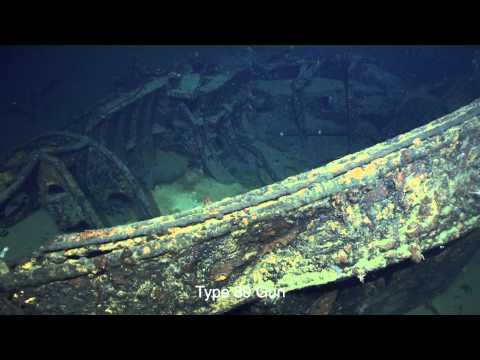 “Since my youth, I have been fascinated with World War II history, inspired by my father’s service in the U.S. Army,” Allen said in a statement.

“The Musashi is truly an engineering marvel and, as an engineer at heart, I have a deep appreciation for the technology and effort that went into its construction. I am honored to play a part in finding this key vessel in naval history and honoring the memory of the incredible bravery of the men who served aboard her.”

He used his Twitter account to publicize the find. In one tweet, he said one image showed the bow of the ship, which features a distinctive chrysanthemum – the flower is the emblem of Japan’s royal family – and a huge anchor.

The other underwater photograph shows one of the Musashi’s valves on which the Japanese characters for “main valve handle” and “open” are legible.

He said the writing on the valve was proof that the ship was of Japanese origin.

RIP crew of Musashi, appx 1023 lost. The pic of the valve 1st confirmation of Japanese origin (clues 2 use apprec). pic.twitter.com/BcJgkhWskb

The director of Japan’s Kure Maritime Museum told CNN after viewing the information posted by Allen that it appeared that the vessel was the Musashi, although further pictures were needed to know for sure.

The Japanese battleship Musashi under intense attack by Task Force 38 aircraft in the Sibuyan Sea. A destroyer is also receiving attacks beyond the battleship.
U.S. Navy/National Archives
gallery

Sinking of the Musashi

The Musashi was one of two Yamato-class battleships constructed by the Imperial Japanese Navy.

Launched in 1940, it was, at the time, the largest class of warship ever constructed, displacing more than 69,000 tons.

The Musashi sank on October 24, 1944, during the Battle of the Sibuyan Sea, part of the Battle of Leyte Gulf, in the central Philippines. According to U.S. Navy documents, torpedo planes from U.S. aircraft carriers scored at least 10 hits on the battleship over the course of four hours. Navy dive bombers also hit the ship 16 times, but it was the torpedo hits that doomed the Musashi.

“She went down by the bow, capsizing when the forward flying (U.S. forecastle) deck was submerged,” said the Navy report, based on survivor accounts.

Two of those survivors, the executive officer and the chief engineer, told how they escaped the sinking.

“The executive officer swam off from one of the upper levels in the tower. He saw the propellers as Musashi disappeared,” the Navy report said. “The chief engineer climbed over the side amidships as Musashi lurched to port. He walked and scrambled around the girth against the roll, climbing over the bilge keel. Finally, he was thrown off into the water and swam away to port. There were no explosions.”

More than 1,000 of the Musashi’s crew were killed during the battle and sinking. The 1,300-plus survivors were taken aboard by other Japanese warships, according to the U.S. Navy report.

Allen said that his superyacht, the MY Octopus, had found the wreck at a depth of around 1 kilometer (3,281 feet).

A statement released by Vulcan, Allen’s company, said that the team combined historical data with advanced technology to narrow the search area, and that Allen had “commissioned a hypsometric bathymetric survey of the ocean floor to determine the terrain” before searching the area with a Bluefin autonomous underwater vehicle.

Kazushige Todaka, the maritime museum director, said that, given the location and the depth at which the wreck was found, he was “90% sure” that the ship was the Musashi.

“I was really surprised because the location of the sunken ship has never been identified since it went down. I have heard countless stories in the past that the ship was discovered, but they all turned out not to be true.”

Todaka said Allen’s team had been in contact with the museum about the ship’s potential location and its expedition.

“It’s a wonderful discovery, if it’s true, as we have long been looking for the battleship,” he said.

“It’s fateful that the discovery was made on the 70th anniversary of (the end of) World War II. The memory of the war has been fading away after 70 years, and the survivors of the war are disappearing. It is very meaningful discovery and a good chance for us to remind ourselves about the war and its tragedy.”

He added that images of the entire body of the ship will be needed to be 100% sure that the discovery is indeed the Musashi.

The Vulcan statement added that the team is “mindful of the responsibility related to the wreckage of the Musashi as a war grave and intend to work with the Japanese government to ensure the site is treated respectfully and in accordance with Japanese traditions.”

Since leaving Microsoft, the company he co-founded in 1975, billionaire Allen has immersed himself in a variety of commercial and charitable pursuits.

He is the owner of several U.S. sports teams – including the Seattle Seahawks – and backed SpaceShipOne, the prototype commercial spaceplane that won the 2004 Ansari X Prize.

His estimated net worth is $17.5 billion, according to Forbes magazine.