Man has seizure while skydiving, saved by instructor

Man has seizure at 9,000 feet while skydiving, becomes unconscious

He is saved by instructor during his free fall

Video of incident has more than 4.4 million views on YouTube

For the uninitiated, skydiving can be scary enough: leaping out of a plane, free-falling at 120 miles per hour, keeping your presence of mind as you pull the cord on your parachute.

Now imagine having a seizure and losing consciousness more than 9,000 feet above the earth.

That’s what happened to Christopher Jones, 22, of Perth, Australia. His experience was captured on a video that has more than 4.4 million views on YouTube.

“Halfway through the skydive, he had a seizure and rolled onto his back,” WA Skydiving Academy business manager and chief instructor Robin O’Neill told the Australian Broadcasting Corporation.

GUY HAS SEIZURE WHILE SKYDIVING 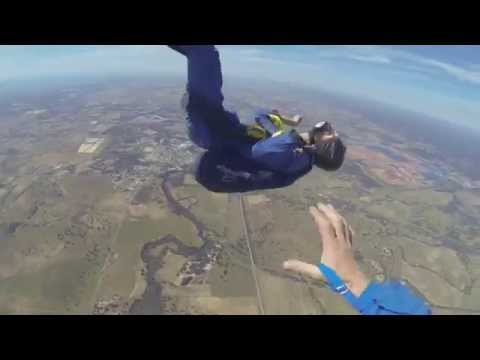 Instructor Sheldon McFarlane, who was wearing a helmet camera, struggled to catch up with Jones. McFarlane finally managed to grab Jones at about 4,000 feet and pull the rip cord. Jones regained consciousness and landed uneventfully, O’Neill said.

McFarlane told the ABC he wasn’t concerned. Thanks to two “AADs” – automatic activation devices – Jones’ parachute was going to automatically deploy, he said.

Nevertheless, the instructor wanted to make sure the situation was completely under control.

“At no time was I worried he was going to hit the ground without a parachute, but given the circumstances and where we were I thought it would be better to get him under parachute earlier than later,” McFarlane said. “I managed to catch him on my second attempt and deploy his parachute.”

Jones, who described the incident on YouTube as “possibly the scariest moment of my life,” told the ABC that skydiving was a substitute for his dream of becoming a pilot. He had been cleared by his doctor to jump.

“I’ve always wanted to have the feeling of flight, so I just thought, considering I can’t fly a plane due to my condition, I thought I’d give it a go,” he said.

Jones told the ABC that he’d been seizure-free for four years but was not intending to pursue a skydiving career.