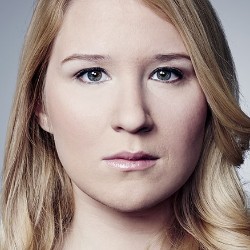 Vice President Joe Biden has been the source of many social media moments. Internet users dubbed finger-guns his trademark salute, he’s had more than one on camera Freudian slip, and his Senate swearing-ins are always must-see. He’s a meme-able veep for the Twitter generation.

Tuesday was no different. After delivering the oath of office to new Defense Secretary Ashton Carter, the vice president waved Carter’s wife Stephanie over to his side of the podium. While Carter was speaking in front of them, Biden put his hands on Mrs. Carter’s shoulders, leaned over and whispered something in her ear. The moment was captured in a photo and Twitter users, as usual, noticed.

But is social media being hard on Uncle Joe? Similar tweets appeared when Biden whispered to Senator Chris Coons’ daughter Maggie during the Senate’s ceremonial swearing-in in January. Coons later said Biden was simply whispering words of encouragement to Maggie, who was visibly uncomfortable during most of the photo op.

PHOTO: Charlie Neiberga/AP
Joe Biden reacts to a question during the 2012 vice presidential debate with Republican Rep. Paul Ryan at Centre College in Danville, Kentucky. Click through the images to see Biden being Biden.
Related Gallery The many faces of Joe Biden

Sure, touching and whispering to people in public can appear to be a uniquely awkward experience, not only for those involved, but for those watching it unfold, particularly if they’re is watching for no longer than the few seconds of a Vine or GIF.

In this case, Biden said at the ceremony today he has known Ash Carter for years and, when you watch the full video, it doesn’t appear entirely obvious that he makes Stephanie Carter uncomfortable. In fact, she nods her head in agreement after Biden talks to her. If you watch for more than a Vine’s-length, the ceremony goes on normally after the whisper seen ‘round the web.

Later on Tuesday, another Bidenism was born, but to much less web acclaim than his earlier GIF-friendly gaffe.

Biden was not meant for the 24/7 instant communication era.

He should have been VPOTUS to Chester Arthur or Polk.

During his opening remarks at a White House summit aimed at combating violent extremism, Biden spoke about the contributions Somali immigrants have made in the Twin Cities and his home in Delaware.

“If you ever come to the train station with me, you’ll notice that I have great relations with them because there’s an awful lot driving cabs and are friends of mine,” he said. “I’m not being solicitous, I’m being serious.”

This isn’t the first time the vice president has gotten in trouble for his remarks about minorities. In 2006, when talking about Delaware’s Indian community he infamously said, “You cannot go to a 7-Eleven or a Dunkin’ Donuts unless you have a slight Indian accent.”

Even in these cases, there are two sides to the Twitterverse. What one person finds offensive could be seen by another as an aversion to political correctness, a trait on which potential 2016 GOP presidential candidate Ben Carson has built his brand.

Despite decades in national politics, Biden hasn’t seemed to recognize the predatory nature of the web – either by choice or by error – and with almost two years left in office, it’s probably safe to assume this won’t be his last Bidenism.