NEW: They were "the best you can imagine an American kid to be," father says

He, his wife and her sister were shot to death Tuesday; man facing murder charges

Not long ago, two lifelong friends talked about all the cool gifts the little kids they knew were getting for Eid al-Fitr, the Muslim holiday that celebrates the end of Ramadan.

Omar AbdelBaky, 24, jokingly complained that when he and Deah Shaddy Barakat grew up in Raleigh, North Carolina, they didn’t get fancy toy helicopters.

Barakat, 23, asked his friend for his address.

Two weeks later, a delivery guy dropped one of those helicopters at AbdelBaky’s door.

“That’s who Deah was – he gave without thinking twice about it. I want people to know that about him – he was such a kind person,” AbdelBaky said.

A day ago, Barakat, his 21-year-old wife Yusor Abu-Salha, and her 19-year-old sister Razan Abu-Salha were shot and killed at the Barakats’ home in Chapel Hill.

Barakat worked tirelessly to raise money in the hope of providing dental care to Syrian refugees in Turkey. Yusor Abu-Salha brought young women together in her community, forging strong friendships while she also focused on school. Razan Abu-Salha was a talented artist.

It was so hard, AbdelBaky said, to conceive of so much life suddenly snuffed out.

All three of them were known for their dedication to service, said Suzanne Barakat, Deah’s older sister.

“They all had so much to offer, and I just want to make sure that we continue that legacy for them…and that all of us Americans, collectively, do not let their deaths go in vain,” she told CNN.

At a press conference on Wednesday, she asked authorities to investigate the “senseless and heinous murders” as a hate crime. It’s a possibility police say they’re considering. Suspect Craig Stephen Hicks has been charged with murder.

‘The best you can imagine an American kid to be’

Deah Barakat was a dental student. Yusor Abu-Salha had wed her husband about a month ago and had just moved in with him, AbdelBaky said.

She had been accepted to UNC-Chapel Hill’s dental program and was set to begin classes in the fall.

Razan Abu-Salha was a student at North Carolina State University.

A Facebook tribute page for the three featured her work as a videographer and an artist.

A post with video footage of her putting together a 3-D model says the university recently recognized her for her art.

“She was wonderful!” someone wrote.

Another picture shows Yusor Abu-Salha’s father twirling her around at her wedding.

Yusor dancing with her father at her wedding. Her wedding was a little more than a month ago. May Allah have mercy on the bride and groom in paradise.

Posted by Our Three Winners on Wednesday, February 11, 2015

Mohammad Abu-Salha told CNN his daughters were always trying to serve the community.

“They all volunteered in downtown Raleigh many times a year to feed the homeless and the hungry,” he said. “They cooked loads of food. They came heartbroken to me to tell me how many grown men they’ve seen, standing in line, waiting for a bite.”

Yusor Abu-Salha also went on a volunteer mission to help at a dentistry clinic for Syrian refugees in Turkey, her father said. Her husband did, too. And they were planning another mission trip to Turkey this coming summer.

The family, he said, is devastated by their deaths. His wife is so heartbroken she’s unable to speak.

“We’re in shock,” he said. “Two children of ours, and our son-in-law…three outstanding, stunning, clean-cut, exceptional, articulate, intelligent, dedicated, charity-working kids, involved in community work, volunteer work, the whole nine yards, the best you can imagine an American kid to be.”

Six weeks ago, Suzanne Barakat said she was crying tears of joy at her baby brother’s wedding.

“Today,” she said, their family is “crying tears of unimaginable pain.”

“My brother, Deah, was a 6-foot-3-inch young man who had the kindest heart, who loved everyone he met, greeted strangers with hugs and dedicated his life to service,” she told CNN’s “AC360.”

He was well-known for his love of basketball. And he made dental school look easy, she said.

“He loved it. He loved what he did. He loved playing with the children when he was working abroad,” she said. “He was happy in everything that he did, and he made it light, and people loved being around him for that.”

The son of Syrian immigrants, Deah raised money to provide dental care to Syrian war refugees. He had already managed to collect at least $10,000, AbdelBaky said.

More money poured in after his death. By Wednesday afternoon, the fundraising web site showed more than $140,000 in donations.

“That is amazing,” his sister said, “and we want to continue that and we want them to be remembered for that.”

The tribute page features a video of Deah Barakat explaining that he hoped to go to Turkey and provide free dental procedures for Syrian war refugees. He said he planned to work with 10 other dentists to hand out toothbrushes and paste at refugee camps and show good oral hygiene and teach refugees how to care of themselves. 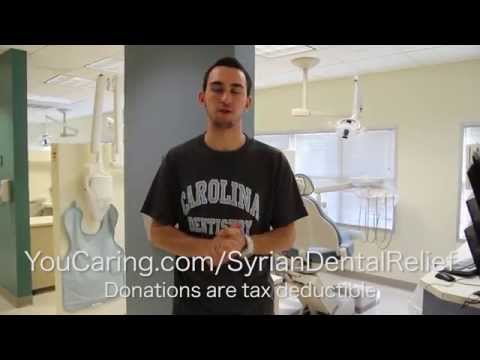 “Have you ever felt helpless about the situation in Syria and felt like you can’t do anything about it? Well, this is your opportunity to help…” he said. “These kids don’t have access to the same health care as us. And their prolonged pain can easily be taken care of with the work that we do.”

Last week, Barakat gave out toothbrushes at a homeless shelter.

His parents taught him and his older brother and sister the importance of generosity, friends said.

AbdelBaky remembers attending massive dinners at Barakats’ home where many laughed and ate and told stories all night.

Last year, Barakat’s mother made lunch for his dental class of about 80 people, driving the home-cooked goodness from Raleigh to Chapel Hill.

A couple in love

When Barakat attended North Carolina State University, where he met his wife, he dreamed of becoming a dentist, his friend said.

“Dentistry was a great fit for Deah – you can get people out of pain and fix smiles and make people happy,” AbdelBaky said.

He was ambitious and hard working, friends said, but he always knew how to play.

Basketball was his game and he was always organizing pickup games.

She said Yusor Abu-Salha was planning to get some girlfriends together this week to hang out, talk about life and discuss the importance of living a just life according to religious principle.

It saddens her immensely when she thinks about the optimism all three shared, suddenly snuffed out.

“There was so much love and so much joy and happiness,” Masmoudi said.

The Barakats “were really an adorable young couple. I don’t know how to say it … they really radiated this kind of light. They radiated humility, kindness, love. You couldn’t help but be inspired by them.”