American held by ISIS moved by suffering of Syrian people

By Ralph Ellis, CNN
Updated 5:36 PM EST, Tue February 10, 2015
Ad Feedback
Video Ad Feedback
The fight against ISIS
Kayla Mueller, working for Support to Life in Turkey, spoke to the Prescott Kiwanis Club in Prescott, Arizona, on May 30, 2013, about the situation in Syria and efforts to build a second camp for Syrian refugees in Turkey.
Matt Hinshaw/The Daily Courier
Now playing
02:25
Questions, accusations linger in Kayla Mueller's death
A man from Lancashire who encouraged Islamic extremists to wage jihad in the West, including targeting Prince George and injecting poison in to supermarket ice-cream, has been convicted today (31 May). Husnain Rashid, 32, posted messages online glorifying successful terrorist atrocities committed by others while encouraging and inciting his readers to plan and commit attacks. One of his posts included a photograph of Prince George, along with the address of his school, a black silhouette of a jihad fighter and the message ìeven the royal family will not be left aloneî. His common theme was that attacks could be carried out by one individual acting alone. Rashid suggested perpetrators had the option of using poisons, vehicles, weapons, bombs, chemicals or knives. Rashid uploaded terrorist material to an online library he created with the goal of helping others plan an attack. He also planned to travel to Turkey and Syria with the intention of fighting in Daesh-controlled territories. He contacted individuals he believed to be in Daesh territory, seeking advice on how to reach Syria and how to obtain the required authorisation necessary to join a fighting group. Rashid provided one individual who had travelled to Syria and was known online as ìRepunzelî, with information about methods of shooting down aircraft and jamming missile systems. All the offences relate to Rashidís activities online between October 2016 and his arrest in November 2017. Rashidís trial started on 23 May at Woolwich Crown Court but he changed his plea to guilty on four counts on 31 May. He will be sentenced on 28 June. Sue Hemming from the CPS said: ìHusnain Rashid is an extremist who not only sought to encourage others to commit attacks on targets in the West but was planning to travel aboard so he could fight himself. ìHe tried to argue that he had not done anything illegal but with the overwhelming weight of evidence against him he changed his plea to guilty. ìThe judge will now deci
Greater Manchester Police
Now playing
02:00
Man convicted after threat to Prince George
the fall of ISIS_00013506.jpg
Now playing
01:54
Fears of a new frontier in terror
CNN
Now playing
04:32
Mosul survivors search for loved ones
inside a former isis jail in raqqa paton walsh_00001610.jpg
Now playing
02:52
Inside former ISIS jails in Raqqa
where is isis leader abu bakr al baghdadi pkg paton walsh_00015316.jpg
ISIS
Now playing
02:06
Hunting for Abu Bakr al-Baghdadi
raqqa stadium damon lklv_00002813.jpg
Now playing
01:46
ISIS used stadium as prison
Raqqa,Syria
CNN
Now playing
02:31
Walking through the ruins of Raqqa
kidnapped yazidi child raised by american isis fighter damon pkg_00003130.jpg
Now playing
03:06
Kidnapped Yazidi boy raised by American ISIS mother
Gabriel Chaim
Now playing
01:48
Exclusive GoPro footage inside Raqqa conflict
CNN
Now playing
02:40
CNN inside Raqqa, former ISIS stronghold
inside raqqa old city_00001920.jpg
Now playing
01:25
Why Raqqa matters
Now playing
01:13
How ISIS is evolving
gabriel chaim
Now playing
01:42
Raqqa drone video shows ISIS execution square
(FILES) This image grab taken from a propaganda video released on July 5, 2014 by al-Furqan Media allegedly shows the leader of the Islamic State (IS) jihadist group, Abu Bakr al-Baghdadi, aka Caliph Ibrahim, adressing Muslim worshippers at a mosque in the militant-held northern Iraqi city of Mosul. The Russian army on June 16, 2017 said it hit Islamic State leaders in an airstrike in Syria last month and was seeking to verify whether IS chief Abu Bakr al-Baghdadi had been killed. In a statement, the army said Sukhoi warplanes carried out a 10-minute night-time strike on May 28 at a location near Raqa, where IS leaders had gathered to plan a pullout by militants from the group's stronghold. / AFP PHOTO / AL-FURQAN MEDIA / --/AFP/Getty Images
Now playing
02:38
ISIS leader seemingly breaks silence

Ex-professor: Mueller "a peacemaker" who was willing to make sacrifices for others

Family and friends: The 26-year-old devoted her life to activism, humanitarian causes

After graduating from college in 2009, she traveled to northern India, the Palestinian territories and Israel to assist humanitarian groups, her family said through a spokeswoman. She then went to Syria to help people whose lives had been torn apart by war, especially children.

“Syrians are dying by the thousands and they’re fighting just to talk about the rights we have,” the humanitarian worker told The Daily Courier, her hometown paper in Prescott, Arizona, in 2013. “For as long as I live, I will not let this suffering be normal.”

ISIS said in an online posting this month that a female American it was holding had died in a Jordanian airstrike on Raqqa, Syria. The Mueller family confirmed her death on Tuesday and said ISIS took her captive in August 2013.

Mueller, 26, grew up in Prescott, a town of about 40,000 people 100 miles north of Phoenix. She showed an early inclination for travel and humanitarian work, according to a September 2007 profile in The Daily Courier.

“I love cultures and language and learning about people’s cultures,” Mueller, then 19, said in the article.

Before going to Northern Arizona University, she worked for the Save Darfur Coalition, wrote letters to members of Congress, took part in environmental causes and was honored with a local award for activism, the article said.

“I always feel that no matter how much I give I always get back more though these projects,” she said.

Carol Thompson, a politics and international affairs professor there, called Mueller a “brilliant” student who asked tough questions and cared deeply about issues of peace, inequality and justice. The two also worked together on Save Darfur and as anti-war activists to make sure that returning veterans were welcomed back to the community.

“Well beyond the classroom, she was a peacemaker,” said Thompson, who last saw Mueller in 2012 and who is currently on a sabbatical in Zimbabwe.

After graduating, Mueller became a globetrotter.

She spent two years living and working with humanitarian groups in northern India, Israel and the Palestinian territories, according to a family spokeswoman. In Israel, she volunteered at the African Refugee Development Center.

Upon returning to Arizona in 2011, Mueller volunteered in a women’s shelter and worked at Northland Cares, an HIV/AIDS clinic, helping to facilitate events and providing local coordination for World AIDS Day, the family spokeswoman said.

“She was truly a remarkable young woman,” said Northland Cares Director Tricia Goffena-Beyer. “Our thoughts and prayers are with the family.”

She traveled to France in December 2011 to work as an au pair so she could learn French to work in Africa, her family’s spokeswoman said.

‘All I can do is cry with them’

After a year in France, she traveled to the Turkish/Syrian border to work with the Danish Refugee Council and the humanitarian organization Support to Life, which assisted families forced to flee their homes, the spokeswoman said.

On a trip home in 2013, she told the Kiwanis Club in Prescott about her work in the Mideast, saying she often drew, painted and played with Syrian children in refugee camps, according to The Daily Courier. Her father is a club member, the paper said.

She described helping reunite a man with a 6-year-old relative after the bombing of their refugee camp.

“This story is not rare in Syria,” the newspaper quoted her as saying. “This is the reality for Syrians two and a half years on.

“When Syrians hear I’m an American, they ask, ‘Where is the world?’ All I can do is cry with them, because I don’t know.” 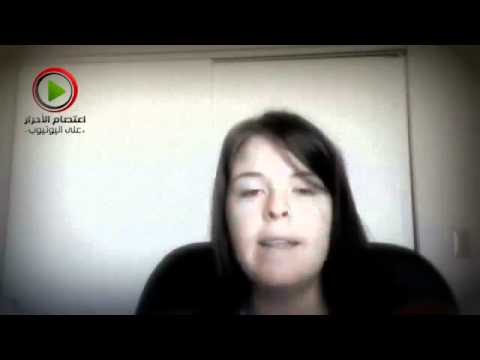 In a YouTube video produced in October 2011, before the rise of ISIS, Mueller said she supported a sit-in that protested the Syrian regime.

“On August 3, 2013, a technician sent by a company contracted by MSF arrived at one of the organization’s structures in Aleppo, Syria, to perform repairs,” the medical aid organization said. “Unbeknownst to the MSF team, Kayla, a friend of the technician’s, was accompanying him. Because additional time was required to carry out the repair work, the technician and Kayla were harbored overnight at the MSF hospital in Aleppo, due to safety concerns.

“Upon completion of the repair work on August 4, the MSF team organized transportation for Kayla and the technician to the Aleppo bus station, from where they were to depart for Turkey. Kayla’s detention occurred during the drive to the bus station.”

In May, the Mueller family received confirmation their daughter had been taken hostage, the family spokeswoman said. The information provided “proof of life.” The family hasn’t said whether they know how she was treated.

U.S. troops may have come close to rescuing Mueller in July when they staged a daring raid at a location inside Syria in an attempt to find journalist James Foley, whom ISIS executed in August, and other hostages.

One U.S. official said they found specific evidence the hostages had been there, including writings on the cell walls. A law enforcement official said hair strands found at the site are believed to have belonged to Mueller.

In a note to Mueller’s family last summer, ISIS said it had grown tired of waiting and demanded 5 million Euros by August 13, according to a source close to the family. It’s unknown whether that execution date was kept by ISIS.

Thompson said that, while she is the professor, it was Kayla who taught her that “peace with justice involves constant struggle and sacrifice. “

“We can honor Kayla most by asking all the parties involved to seek understanding of difference, of those with whom we most disagree,” Thompson said. “Thank you Kayla, for teaching your professors and many others. We stand very humbled in your light.”