Fallon rapped with Will Smith on Thursday night's show

He's had viral hits all this week

Fans have come to expect it of him

Jimmy Fallon is killing the game.

The host of “The Tonight Show” totally won this week. His skits featuring hilarity with some of Hollywood’s biggest and most beloved stars have been viral deliciousness for fans.

On Thursday night, Fallon and Will Smith covered the 1988 song “It Takes Two” by Rob Base & DJ E-Z Rock, using an iPad app. And it was awesome.

The app allows users to layer sounds and play them on a loop. The pair turned it into a performance of the classic rap song.

It was just the latest in Fallon’s buzzworthy antics.

On Sunday night, Will Ferrell and Kevin Hart joined Fallon for an epic lip sync battle that found Ferrell attempting to mimic some of Beyonce’s dance moves from her “Drunk in Love” music video.

The host got an assist that night from singers including Sam Smith, Carrie Underwood, Ariana Grande and One Direction for a Brady Bunch-style a cappella version of Queen’s “We Are the Champions.”

Viewers were seeing double on Tuesday night when Fallon reprised his impersonation of the legendary Neil Young singing “Old Man,” this time joined by the actual Young.

Fallon’s Wednesday night show also set social media afire with a nostalgic performance, though it wasn’t a musical one.

Members of the cast of “Saved by the Bell” reunited for a skit that found Fallon as a student at Bayside High. Once again, he nailed it. 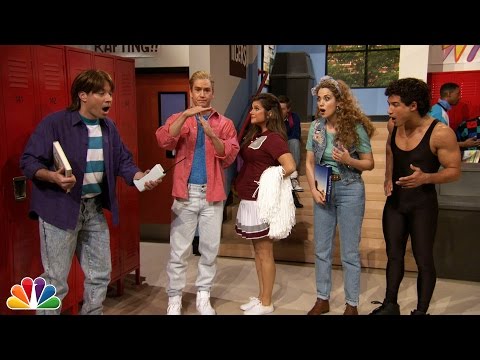 It’s what fans have come to expect of Jimmy Fallon.