Gadd, a triple gold medalist at the X Games, described feeling "hypothermic" after the climb

Most visitors to Niagara Falls consider it a place for romance. Ice climber Will Gadd thinks of the famous falls as a spot for adventure.

There have been countless attempts by daredevils to ride down both parts of Niagara Falls – the American Falls on the U.S. side and Horseshoe Falls on the Canadian side. But earlier this week, Gadd made history when he became the first person to climp up the falls.

The Canadian ice climber used only ice hooks to scale the frozen cliffs at Terrapin Point, a 147-foot section directly next to Horseshoe Falls.

“I checked out the spot we were thinking of climbing in the summer. You’d be swept away by the torrential downpour then,” Gadd said on redbull.com. “On a warm winter (day), there’s no climb here.”

But on a cold, freezing day in late January, the wall of water is a wall of ice – the icing is so heavy that the area is closed to tourists during the winter months – a perfect scenario for Gadd. 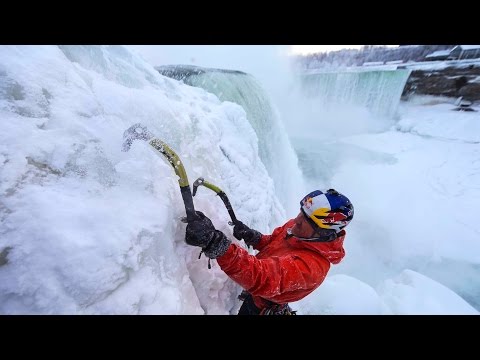 He clambered up the frozen walls three times, taking about an hour each trip, according to redbull.com. Gadd described the ice as “unstable” because it formed in distinct layers of ice and snow, which made the climb more difficult.

“That climb beat me up,” he said. “I may have reached the top, but Niagara won the war. At the end of the day I was hypothermic.”

Indeed, Gadd’s biggest challenges in the climb seemed to be getting really cold and really wet. As he climbed, right next to him 681,750 gallons of water per second surged down Horseshoe Falls.

“I was so close to the water, I could reach out and stick my ice tool in the Niagara Falls,” Gadd told redbull.com. “At one point I was behind the water, climbing on ice that froze behind the falls. I got a whole lot of Niagara down my neck!”

Scaling the falls is the latest feat for Gadd, who was recently named a Nat Geo Adventurer of the Year. He’s also a three-time gold medalist at the X Games and won the Ice Climbing World Cup, according to his website.