‘Dad’ gets a makeover in Super Bowl ads

Study: Only 7% of men relate to the way the media depicts masculinity

Editor’s Note: Kelly Wallace is CNN’s digital correspondent and editor-at-large covering family, career and life. Read her other columns and follow her reports at CNN Parents and on Twitter.

Are you tired of seeing the bumbling, clueless, buffoon-like dads in commercials – the ones whose biggest contribution to child rearing is uttering “Yes dear” as their partners do all the work?

I am and so are countless other men and women. And now, it seems, Madison Avenue is getting the message.

In Sunday’s Super Bowl – which will be seen by more than 100 million people if last year’s telecast is any indication – a handful of ads will showcase dads as they really are (what a concept!) – as loving, caring, supportive, helpful and major figures in their children’s lives.

“It’s about time,” said Buzz Bishop, a father of two in Calgary, Alberta, and founder of the blog Dad Camp.

One of the brands is Dove Men+Care, which is re-releasing its widely popular ad that debuted last year for Father’s Day.

The ad celebrates fathers with vignettes of children of all ages saluting their individual dad by calling him “Daddy,” “Da-Da” or “Dad.” It will be showcased in a 60-second spot during the big game. (NBC is charging around $4.5 million for 30-second commercials, according to CNN Money.) 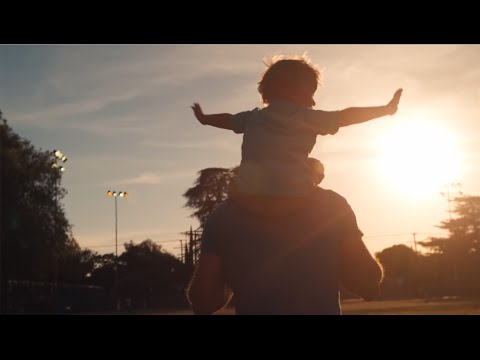 I tear up every time I watch it.

“This provides a counter-narrative to all the action hero, buffoon images that we see,” said Michael Kimmel, professor of sociology and gender studies at Stony Brook University on Long Island. He also heads up the school’s Center for the Study of Men and Masculinities.

Kimmel was hired by Dove Men+Care as an adviser to help analyze and build on research that the brand conducted last year on how men view masculinity.

This Super Bowl ad will leave you speechless

Men today are spending far more time doing housework, helping with childcare and enjoying more egalitarian relationships than any generation in American history, and their ideas about what it means to be a man have begun to shift as well, said Kimmel, who is also the author of more than 20 books including “Manhood in America: A Cultural History.”

Think about it: Seattle Seahawks star Richard Sherman said there is a chance he could miss the Super Bowl if his girlfriend goes into labor on Game Day. Would that have happened years ago?

Kimmel said his father grew up at a time that very much matched the experiences of the character Don Draper in “Mad Men.”

“I grew up thinking my world would look like Don Draper’s but it looked nothing like that,” said Kimmel. “And my son (age 16) … absolutely knows that his world will not look like that.”

Other brands getting high marks from fathers craving a realistic portrayal of dads today include Nissan, which released a preview clip of its ad – its first Super Bowl commercial in 18 years.

The ad appears to showcase a race car driver balancing his high-stakes work with the birth of a child. As CNN Money reports, the soundtrack of the ad is Harry Chapin’s immensely popular song “Cat’s Cradle,” which is about a father who is too busy at work and can’t spend much time with his son.

Nissan back in Super Bowl after 18 years

In advance of the airing of the commercial on Sunday, Nissan also has launched a social media campaign at WithDad.Com, inviting people on YouTube to submit videos about what fatherhood means to them.

Doug French, co-founder of the Dad 2.0 Summit, one of the largest gatherings of parenting writers, dad bloggers and online personalities and now in its fourth year, says brands are increasingly realizing that dads are consumers and caregivers too.

“It’s no longer a viable thing to try and hook in the moms by sending a collective eye roll at the dads,” said French.

He remembered how Huggies, just a few years ago, released an ad showing how fathers were pretty much incapable of staying with their kids for a week while their wives were gone.

“We’re not Superman, but we’re not idiots either,” said French.

In conversations with dads, mainly through email, about the new ads, including Toyota’s campaign showcasing former football players talking about the role their fathers played in their lives, they applauded the move by brands and talked about the larger impact especially on boys and young men.

“While football displays one form of entertaining masculinity, it is important for boys to see that masculinity or being ‘like a boy’ also includes caregiving, compassion and sacrifice for family,” said Vincent O’Keefe, a former professor, writer and stay-at-home father of two girls, who is currently working on a memoir about gender and parenting.

Bishop, the father of two in Calgary, said “good positive portrayals” of modern fathers are needed because they are “a legitimate driver of public opinion and attitudes.”

“When commercials say gay couples are ‘OK’ or interracial marriage is ‘OK’ or involved fathers are ‘OK,’ then people come out of their shell and buy in,” said Bishop. “Advertising doesn’t just sell products, it very much shapes public opinion.”

How to Super Bowl #LikeAGirl

Jim Higley, a father of three and a radio host, writer and founder of Bobblehead Dad and spokesman for the Dove Men+Care brand, said there remains a “big gap” between what men see on the screen and how they feel in real life.

“Caring for my family is the most important thing in my life. It defines me as a man,” said Higley, who said it is “refreshing” to see “a little bit of reality” in Super Bowl commercials.

“Our self-worth is wrapped up in the people we love and our ability to care for them. It’s the new definition of strength for a men,” he added.

Of course, brands are ultimately driven by profits, and so those that reflect men as they are today stand to earn more than just a feeling of goodwill.

“People who get it right are going to reap major benefits,” said French of the Dad 2.0 Summit.

John Furjanic, a single father of a 7-year-old in Chicago, summed it up this way. He’s received some attention from single women who are taken with his involvement in his daughter’s life.

“It makes sense that advertisers would follow the trend.”

What do you think about the way dads will be portrayed in some Super Bowl ads? Share your thoughts with Kelly Wallace on Twitter or CNN Living on Facebook.