Stories proliferate of him using intimidation in business

He once told a reporter that he got "results"

As a former football player with both an imposing physique and personality, few people have felt comfortable calling “Suge” Knight by his birth name, Marion.

Even Suge is short for a family nickname that hardly seemed fitting for one of hip-hop’s most feared impresarios: “Sugar Bear.”

Being known as big and cuddly is not how Knight rose to fame. Instead he is best known for helping promote West Coast rap in a field that had long been dominated by East Coast artists – and elevating an East Coast/West Coast hip-hop feud to a level that many still hold accountable for the deaths of two of the genre’s biggest stars.

How the co-founder of Death Row Records – who is being held in connection with one’s man death in an alleged purposeful hit-and-run – came to be considered such a tough guy is equal parts legend and rap sheet.

Born in Compton, California, as the youngest of three children and the only son, Knight had sports ability and size, earning a football scholarship to the University of Nevada, Las Vegas. His former coach told the Las Vegas Sun in 1996 that Knight was a good kid.

“He wasn’t a problem guy at all,” said Wayne Nunnely, who was school’s head coach in 1986 when Knight played there and who later went to work for the New Orleans Saints. “You didn’t really see that street roughness about him.”

Knight briefly played as a defensive lineman for the Los Angeles Rams before becoming a bodyguard for singer Bobby Brown. That gig didn’t last long but helped give him a larger glimpse into the music industry.

Being from Compton, Knight had for years been friends with fellow native Andre “Dr. Dre” Young, a member of the controversial rap group N.W.A. Its hard-core songs include “F*** tha Police,” which helped form the basis for what became known as “gangsta rap.”

The oft-repeated tale is that to get Young released from his contract with Ruthless Records owned by fellow N.W.A. member Eric “Eazy- E” Wright, Knight appeared at the label’s offices with a group of men armed with pipes and baseball bats.

“I know you’ve heard all the stories,” Knight told a New York Times Magazine writer in 1996 about the incident. “But you have to realize one thing: results.”

Young was eventually released from his contract and became Knight’s flagship artist when he co-founded Death Row Records in 1991.

Another infamous story had Knight dangling rapper Vanilla Ice over a balcony to get the latter to share the profits from his hit song “Ice Ice Baby.” The rapper, whose legal name is Robert Van Winkle, has since said the incident has been exaggerated.

“I went to my hotel room and Suge was in there with several people,” Van Winkle said during a 1999 VH1 “Behind the Music” episode about his career. “He let me know he wanted to get some points off the record ‘Ice Ice Baby.’ Suge took me out on the balcony, started talking to me personally. He had me look over the edge, showing me how high I was up there. I needed to wear a diaper that day. I was an ‘investor’ in Death Row Records with no return on my money.”

The rapper added, “He didn’t hang me off from any balcony, okay. The story’s been kind of blown out of proportion and I want to clarify that Suge and I have no bad feelings towards each other.”

Knight’s roster of artists included several who were no strangers to violence and run-ins with the law, including Snoop Doggy Dogg (later known as Snoop Dogg and Snoop Lion) and Tupac Shakur. In 1994 Shakur accused producer Sean “Puffy” Combs and rapper Christopher “Biggie Smalls” Wallace with being involved in an incident at a New York studio in 1994 in which Shakur was shot.

Both Combs (who over the years has also been known as “Puff Daddy, “Diddy” and “P. Diddy”) and Wallace denied the accusations. But the tensions intensified in 1995 after Knight gave a speech at the Source Awards, where he said, “Any artist out there that want to be an artist and stay a star, and don’t have to worry about the executive producer trying to be all in the videos, all on the record, dancing … come to Death Row!” Many took the comments as a direct dig at Combs, who often appeared in his artists’ music videos.

The following month Jake Robles, a Death Row employee, was killed during a late-night party in Atlanta in which both Knight and Combs were present with their entourages. Those from Knight’s camp blamed Combs’ bodyguard, and the death brought public visibility to what was known as the East Coast/West Coast rap war.

Knight was driving the car in which Shakur was a passenger when the rapper was shot to death in Las Vegas in 1996. The following year Wallace was shot to death while riding in a caravan in Los Angles that included his friend and mentor Combs. There was speculation that both of the deaths were tied to the feud, though the slayings remain unsolved.

In 1996, Knight was sent to prison for almost five years for assaulting a man in a Las Vegas hotel on the night Shakur was killed. In 2002, he was jailed for violating his probation by associating with known gang members and again the following year for punching a parking attendant outside a Hollywood nightclub. 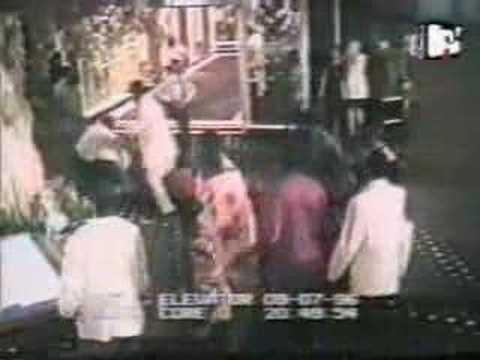 In 2005, Knight was shot in the right leg at a party in Miami held in honor of Kanye West’s planned appearance before the MTV Video Music Awards. History repeated itself in August 2014 when Knight was shot six times at another pre-VMAs party, this one hosted by singer Chris Brown.

In October, Knight and comedian Micah “Katt” Williams were arrested for allegedly stealing a photographer’s camera.

His legal issues and the departure of many of his top acts resulted in Knight’s label filing for bankruptcy in 2006.

“It became the blueprint for any label that’s out, including the majors,” he said. “I was the first person doing 360-degree deals with all the artists; the majors would tell the artists, ‘It’s the worst piece of s**t deal in the world, don’t go for it.’ And now they’re doing it.”