Don’t think fictional “Glee” choir director Will Schuester. And no, not the leader of an admission-by-audition school like the one that inspired the 1980 movie “Fame” and a subsequent television show. 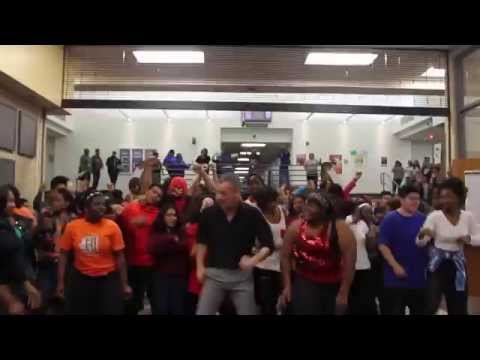 “I heard the song before Christmas and fell in love with it,” Pankey told the Dallas Morning News.

“We are a project-based school – there are only two in the Metroplex – and that means you give the students a project, put them in teams and they have to come up with solutions. They had three weeks to work on it, then present as a group what they learned.”

The YouTube video has been seen more than 3 million times since its January 24 release.

Pankey promised to join in the fun if his six theater classes would let him. (Of course, they said yes.)

The teens impressed one key player: Mars himself, who said he cried when he saw the video.

I cried at the end. Im still a thug though. Thank you to everyone involved in making this video.