LZ: Oscar is much smaller than Selma 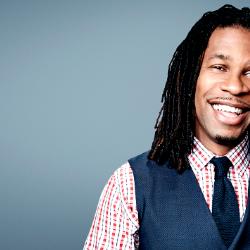 He says calling out Hollywood racism fine, but it may not be the reasons for only 2 nods

LZ: I don't need Academy to tell me how I feel about Selma, which is about awakening humanity

Editor’s Note: LZ Granderson is a CNN contributor, a senior writer for ESPN and a lecturer at Northwestern University. He is a former Hechinger Institute fellow, and his commentary has been recognized by the Online News Association, the National Association of Black Journalists and the National Lesbian and Gay Journalists Association. Follow him on Twitter @locs_n_laughs. The opinions expressed in this commentary are his.

On what would have been the Rev. Martin Luther King Jr.’s 86th birthday, the Academy Awards decided to snub a beautiful film made about a seminal moment in his life.

“Selma” did pick up two nominations, including one for best picture. But when the Hollywood gods consider a film to be truly great, its actors and/or actresses, screenplay and particularly its director are also recognized. “Selma” is a good film that told a great story, at least according to Academy of Motion Picture Arts and Sciences voters. Those voters are 93% white, 76% male and the average age is 63, according to a 2012 analysis by the Los Angeles Times.

But did those demographics play a role in how “Selma” was received? True, the historical drama has been besieged by criticism over accuracy, particularly its portrayal of President Lyndon Johnson. In the film, King and Johnson are depicted as a lot more adversarial than the actual tapes of their conversation suggests.

But it’s hard to see that being the reason for its snub: “Gravity” was nominated for 10 Oscars, won seven, and yet you won’t find an astronaut who would describe the film as accurate. And “Dallas Buyer’s Club” was also a 2014 Oscar darling that sprinkled creative liberties all over a true story.

Race could be invoked as a factor when you remember the email exchange between two top-level Sony executives that became public courtesy of “The Interview” hack. In it they joked about the kind of movie President Obama prefers and then began listing only those starring black people. But the two were also unkind to Jeffrey Katzenberg in that same exchange. There were backstabbing remarks revealed in emails about Angelina Jolie and Adam Sandler as well.

My point is – and I’m sure I’m at risk of losing my black card for writing this – when those same old, white men made “12 Years A Slave” a favorite of the Oscars just a year ago, it is hard to say the snubbing of “Selma” is all about the demographics of the voters. Some, sure. But all?

Related Video 'Selma' slammed for inaccuracy, but is criticism fair?

Remember, these people live in a land of make believe, where it’s normal for the inhabitants to be injected with silicone. Oscar snubbings could come from a thousand superficial reasons, like someone sleeping with or not sleeping with the right person at the right time. In a town full of gay men, the heart wrenching “Brokeback Mountain” somehow lost out to the woefully mediocre “Crash.” Leonardo DiCaprio’s trophy case continues to sit empty. And I will never understand how “Shakespeare in Love” beat “Saving Private Ryan” for best picture. Truth be told. my favorite film of 2014 was “The Drop” and I don’t think that was nominated for anything by anyone.

It would have been wonderful to see “Selma” director Ava DuVernay become the first black female director nominated for an Oscar. She is incredibly talented and it is always nice to be recognized by peers. But I do not need her to win an Oscar to tell me how I should feel about “Selma.”

I do not need the Academy to tell me how I should spend my money at the movies. I do not need old, white men to validate a story so deeply personal and relevant to me today. That’s not to suggest Hollywood’s racism should not be called out. Only that the true story of Selma is much more than calling out racism.

Related Video Selma: 'They were beating us ... I couldn't understand'

To paraphrase the acceptance speech Common gave at the Golden Globes on Sunday, “Selma” the movie and Selma the historic marches are about the awakening of our humanity. The old guard at the Oscars has the power to snub “Selma” for whatever reason it sees fit. But as a summer full of marches for the fight for equality reminded us, Hollywood has neither the power to snub nor the authority to validate Selma.