Breeanna Hare, CNN
Updated 9:53 AM EDT, Wed October 29, 2014
Link Copied!
Ad Feedback
"Harry Potter and the Sorcerer's Stone," the first film in the eight-part franchise, was released in 2001. The movie series wrapped 10 years later with the second part of "Harry Potter and the Deathly Hallows." With a highly anticipated movie spinoff, "Fantastic Beasts and Where to Find Them," due in theaters in 2016, we check in with some of Hogwarts' most memorable students.
Warner Bros.
In 2014, Daniel Radcliffe proved on "The Tonight Show" that his talents go far beyond acting; Radcliffe's also a pretty great rapper. The "Harry Potter" star appeared in 2015's Judd Apatow comedy "Trainwreck" and has four movies scheduled for 2016 -- including one in which he plays late GOP strategist Lee Atwater.
Warner Bros./Stuart C. Wilson/Getty Images
Since portraying sharp witch Hermione in the "Harry Potter" series, Emma Watson has broken away from the supernatural with roles grounded in the (mostly) real world. After "My Week With Marilyn," "The Perks of Being A Wallflower" and "The Bling Ring," she showed her sense of humor in Seth Rogen's outlandish summer comedy "This Is the End." She announced in February that she's taking a break from acting.
Warner Bros./TIMOTHY A. CLARY/AFP/Getty Images
Rupert Grint kept it fairly low-key after he ended his 10-year run as one of Harry Potter's best friends, Ron Weasley. He took on a risky role with 2013's "CGBG"; if you need proof that Grint's all grown up, check out the trailer.
Warner Bros./Ian Gavan/Getty Images
By the time the "Potter" movies wrapped, Matthew Lewis -- and his character, Neville Longbottom -- had morphed into quite the charming young man. He initially migrated over to TV for a spell with "The Syndicate" and "Bluestone 42."
Warner Bros./Karwai Tang/WireImage/Getty Images
Just enough time has passed for us to stop cringing at the sight of Tom Felton, who came to be known as the weakling bully Draco Malfoy. Even while working on the "Potter" franchise, Felton dabbled in other films, like "The Disappeared" and "Get Him to the Greek." Felton has been busy since "Potter" wrapped, and he appeared in the World War II movie "Ghosts of the Pacific" and the TNT cop drama "Murder in the First."
Warner Bros./Chris Weeks/Getty Images for Burberry
Bonnie Wright began playing Ginny Weasley at age 10, and since leaving the franchise, she has been on a steady diet of dramas. Wright appeared in "The Philosophers," followed by "Before I Sleep" with Tom Sizemore.
Warner Bros./Everett/D Dipasupil/Getty Images
The brothers who played the elder Weasleys -- George and Fred -- don't have the trademark ginger hair anymore, but they're still recognizable as the prankster pair. James and Oliver Phelps are still happy to talk all things "Potter," even as they move on to other endeavors. James has been active on stage, and Oliver has been traveling in support of his website, JopWorld.com.
Warner Brows./Gustavo Caballero/Getty Images
Evanna Lynch's Luna Lovegood showed up halfway through the "Potter" saga, but her character was so wonderfully strange she's easily among the most memorable. And if there's anyone who's eager for the "Harry Potter" spinoff films, it's Lynch: "Maybe 'Fantastic Beasts' will turn into a long ting like HP did & I can play Luna as an old lady?" she tweeted. "Even if I'm too old to play Luna, can I go through 10 hours prosthetics to play a crumple-horned-snorkack. Please??"
Warner Bros./Aaron Davidson/Getty Images
Devon Murray's Seamus Finnigan was an easy character to love, and fans have missed seeing Murray (and hearing his accent) on the big screen. Murray has not appeared in movies since the last Potter film but assured a supporter from his unverified Twitter account in September 2013 that he's "been offered a lead role in a new movie so could be seeing my mug soon :)"
Warner Bros./Gerardo Mora/Getty Images
Jamie Waylett's Vincent Crabbe appeared in the first half of the franchise, and life post-"Potter" hasn't been so easy for the actor. In May 2012 he was sentenced to two years in jail for his participation in the 2011 London riots.
Warner Bros./Press Association/AP

Daniel Radcliffe blew everyone away on "The Tonight Show"

The actor showed that he can rap

He's a known fan of the art form

Daniel Radcliffe has blown the Internet’s collective mind, but this time not with his acting.

No, it’s his rap skills that took everyone by surprise on Tuesday night’s “Tonight Show.”

The 25-year-old actor was on the program to promote his new movie “Horns,” and talk turned to his love of music. Radcliffe’s a known fan of hip-hop and counts Eminem as one of his favorite artists.

“I was the first kid in my class to learn ‘The Real Slim Shady,’” Radcliffe told host Jimmy Fallon. “I’ve always had an obsession with memorizing (lyrically) complicated, intricate and fast songs.”

But it wasn’t a Slim Shady track that Fallon asked him to perform – it was Blackalicious’ tongue-twisting “Alphabet Aerobics.”

When Fallon handed Radcliffe the mic, the actor calmly slipped out of his jacket and began to give a jaw-dropping performance without breaking a sweat or stumbling over a line. 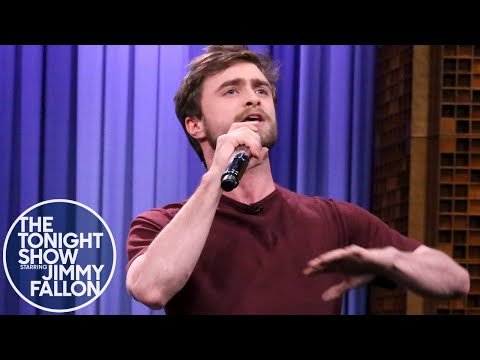 If Radcliffe can write as well as he can rap, he just might have an album in his future.