First on CNN: Hagan hits back after hearing heat 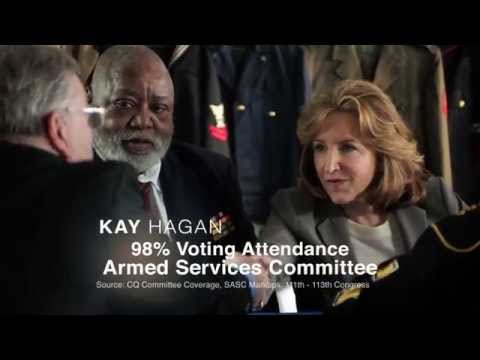 Sen. Kay Hagan admitted this week she missed a hearing on ISIS and other threats to attend a fundraiser.

Other incumbents are facing heat in other key Senate races for missing hearings.

Republicans immediately pounced on the report with several ads slamming her absence.

Sen. Kay Hagan is punching back at her opponent after getting slammed by Republicans this week over missing a classified briefing on ISIS and other security threats to attend a fundraiser.

In a TV ad released first to CNN on Friday, the North Carolina Democrat rebukes GOP attacks, plays up her voting attendance record on the Armed Services Committee and slams her rival North Carolina House Speaker Thom Tillis as a “hypocrite.”

Hagan admitted earlier this week that she missed an Armed Services Committee meeting to attend a fundraiser. What she didn’t tell reporters in that post-debate press conference was that the meeting was in fact a classified briefing on ISIS and other national security threats with the Director of National Intelligence James Clapper.

Hagan’s ad spotlights Tillis’ record of missing legislative work in favor of fundraising, which even prompted his hometown paper to call for Tillis’ resignation – a clip featured in the latest Hagan ad.

The ad also claims Tillis has “no military plan to take out ISIS” and plays up Hagan’s 98% voting attendance record and says she “leads hearings on eradicating terrorists like ISIS.”

“You know, there was one,” Hagan told reporters on Tuesday. “And what had happened at that hearing, it was scheduled early in the day, and then votes were scheduled, and then that hearing had to be postponed later that day. So yes, I did miss that one.”

That statement rolls uncut for 14 seconds in the 30-second sport after viewers are led in with footage of masked gun-wielding ISIS militants while a narrator talks about ISIS’s “mass murder” campaign, threats of terrorism on U.S. soil and beheading of Americans.

“Hagan skipped the hearing for a fundraiser,” the ad closes.

And when confronted with his own voting record, Tillis deflected a question about his habit of putting cash campaigning before his State legislature duties.

“Quite honestly, if I had anything approaching the seriousness of the threat of ISIS, I would have canceled anything I was doing.”

“There is nothing more important than receiving briefings on our national security,” Tillis told reporters on a conference call Wednesday. “It’s the top responsibility of every Member of Congress. Senator Hagan has failed to do her job. What is her excuse for not showing up to work over half the time?”

The Democratic senator’s campaign had earlier confirmed that Hagan attended less than half of the committee’s 49 public hearings in the last two years, but that none of those absences were tied to fundraisers.

Faced with questions Wednesday about why it hadn’t revealed that a fundraiser trumped a hearing, the campaign insisted it hadn’t been not forthcoming because that list of missed hearings didn’t include closed-door briefings – like the one she missed Feb. 27 to attend a New York fundraiser.

Republicans immediately pounced on the report that Hagan missed a crucial briefing on the ISIS threat, an issue that now has the potential to swing the already neck and neck race in Tillis’s favor. Polling over the last week has shown Hagan maintaining a razor-thin two- to four-point lead over her challenger.

Charges that incumbents have missed hearings, briefings, votes, and other official work are popping up in a several closely-fought Senate races this year.

And in the Republican-leaning Tar Heel state, which boasts a large military population, Tillis is betting Hagan’s absences from a national security hearings and at least one intelligence briefing will hurt the first-term senator.

Democratic campaign operatives in Washington, who are already battling headwinds in their effort to keep the Senate in Democratic control, conducted private polling on the question so they could fully understand its impact. The results showed the issue is very potent and could damage even seasoned candidates.

Republicans are seizing on the ISIS threat, with Republican ads and accusations flying in New Hampshire and Colorado hitting Democratic Senate candidates for missing hearings on ISIS.