‘Saved by the Bell’ movie: What we learned

Some fans were disappointed

It was loosely based on a book by a cast member

“Saved by the Bell” the series was beloved. The “unauthorized” TV movie about the show, not so much.

There was lots of chatter on social media Monday night during the airing of the Lifetime made-for-television movie “The Unauthorized Saved By The Bell Story.” #SavedByTheBellUnauthorizedStory was trending worldwide on Twitter.

But not everyone loved was what purported to be a behind-the-scenes look at the happenings on the set of the 1990s teen comedy.

“I have never been so disappointed by a Lifetime movie in my life. #SavedByTheBellUnauthorizedStory,” tweeted one viewer.

I have never been so disappointed by a Lifetime movie in my life. #SavedByTheBellUnauthorizedStory

Brian Lowry, TV columnist for Variety, wrote, “So it turns out ‘The Unauthorized Saved by the Bell Story’ is really just Lifetime for ‘Sharknado,’ ” referencing the hit over-the-top Syfy movie, which some thought was so bad it was good.

The film is executive produced by Dustin Diamond, who played loveable nerd “Screech” Powers, and loosely based on a book he wrote about his time on the series. So it’s no surprise that there is lots of focus on the young Diamond feeling undervalued and overlooked on the show.

There is also plenty for die-hard fans, including the iconic scene in which character Jessie Spano (played by Elizabeth Berkley) loses it because of caffeine pills. 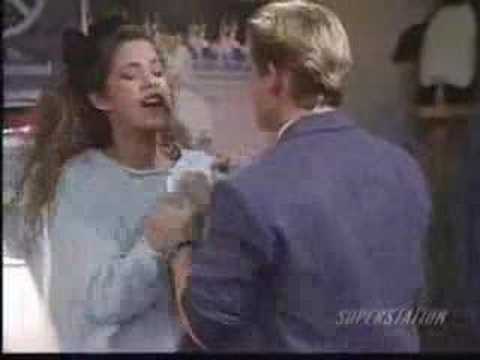 Some of Diamond’s castmates went on record before the movie’s airing to state that they weren’t involved with the production and that they disagreed with how the actor portrayed their time on the show. Diamond has said his book was ghostwritten and contained inaccuracies.

In the TV movie, young Diamond (played by Sam Kindseth) secretly drinks and falls in with the wrong crowd.

Kevin Fallon of The Daily Beast writes that “It’s as if the script was really Diamond’s tear-stained diary entries from 1992 reformatted in Final Draft and then mailed to Lifetime.”

Fallon added, “The two-hour cinematic manifestation of a chip on Diamond’s shoulder slogs along, depicting Diamond as the slighted cast member, shunned by his costars because of how much younger he is and whose talents are ignored because the other actors are more attractive and popular.”

But not everyone was disappointed with the production. One fan tweeted, “I LOVED #SavedByTheBellUnauthorizedStory on @lifetimetv ! <3 ;) I just wonder how much is true and how much is false! lol ;)”

I LOVED #SavedByTheBellUnauthorizedStory on @lifetimetv ! <3 ;) I just wonder how much is true and how much is false! lol ;)