Todd Leopold, CNN
Updated 2:42 AM EDT, Wed August 20, 2014
Link Copied!
Robin Williams died August 11, 2014, at age 63. Williams' peers regarded him as a brilliant actor and comedian. His friend David Letterman remembered him as "nothing we had ever seen before." Click through to see moments from the beloved actor's remarkable life.
Art Streiber/CBS/Getty Images
Williams first shot to stardom with Pam Dawber in the sitcom "Mork & Mindy" in September 1978.
Jim Britt/ABC/Getty Images
Williams attends the Robin Williams Opening Party on April 11, 1979, at Studio 54 in New York City.
Ron Galella/WireImage/Getty Images
This 1982 file photo originally released by Warner Bros. Pictures shows Williams as T.S. Garp from the film "The World According to Garp."
Warner Bros./AP
Williams and his first wife, Valerie Velardi, join a huge number of photographers packed into singer Paul Simon's apartment to celebrate Simon's wedding to actress Carrie Fisher in New York City on August 16, 1983.
David McGough/Getty Images
Williams, center, takes time out from rehearsal at NBC's "Saturday Night Live" with cast members Eddie Murphy, left, and Joe Piscopo on February 10, 1984. Williams would appear as guest host on the show.
Suzanne Vlamis/AP
Robin Williams was honored during 2014's Emmy telecast with a tribute led by friend Billy Crystal, who hosted the "Comic Relief" benefits with Williams and Whoopi Goldberg (seen here in 1986).
HBO/Getty Images
Williams enjoys music through a headset in a scene from the film "Good Morning, Vietnam" in 1987.
Archive Photos/Moviepix/Getty Images
Williams portrayed a teacher in the movie "Dead Poets Society" in 1989, one of his first mostly dramatic roles.
Touchstone Pictures/Getty Images
Williams went to all lengths to stay with his children in the 1993 movie "Mrs. Doubtfire."
20th Century-Fox/Getty Images
From left, Bonnie Hunt, Bradley Pierce, Kirsten Dunst and Williams hold one another in a scene from the 1995 film "Jumanji."
TriStar/Getty Images
Comedians and co-hosts, from left, Billy Crystal, Whoopi Goldberg and Williams sing and dance the 1940s-era opening number to "Comic Relief VII" on November 11, 1995, in Los Angeles.
Mark J. Terrill/AP
Jay Leno laughs as Williams jokes around during a taping of "The Tonight Show with Jay Leno" on November 13, 1995, at the MGM Grand Hotel in Las Vegas.
Lennox McLendon/AP
Williams and Nathan Lane starred in the film "The Birdcage" in 1996.
United Artists/Getty Images
Williams visits a sick child in a scene from the film "Patch Adams" in 1998.
Universal/Getty Images
Williams and his wife, Marsha, pose for photographers with their daughter, Zelda, as they arrive at the premiere of the film "Patch Adams" in December 1998 in New York City.
Jeff Christensen/Reuters/Landov
Williams wears a clown nose as he places his hands in concrete during a ceremony outside Mann's Chinese Theatre in Hollywood in 1998. In the critically acclaimed "Patch Adams," he played a doctor who used humor to help heal his patients
Vince Bucci/AFP/Getty Images
Actor-writers Matt Damon, left, and Ben Affleck, right, pose with Williams, holding the Oscars they won for "Good Will Hunting" at the 70th annual Academy Awards in 1998. Damon and Affleck won for best original screenplay, and Williams won for best supporting actor.
HAL GARB/AFP/Getty Images
Williams donates blood at the Irwin Memorial Blood Center in San Francisco on September 11, 2001.
Justin Sullivan/AP
U.S. Postal Service team rider Lance Armstrong rides with Williams during training on a rest day of the 89th Tour de France cycling race in Vaison La Romaine on July 22, 2002.
Reuters/Landov
Williams plays Rainbow Randolph in the 2002 black comedy "Death to Smoochy."
Courtesy Warner Brothers
Williams and Oscar host Billy Crystal perform at the 76th Academy Awards show in 2004.
Timothy A. CLARY/AFP/Getty Images
Williams poses for pictures with U.S. soldiers at the main U.S. base at Bagram, Afghanistan, on December 16, 2004.
Emilio Morenatti/AP
Williams in 2007's "License to Wed."
Couresy Warner Bros.
Williams and Susan Schneider arrive at the premiere of "World's Greatest Dad" in Los Angeles on August 13, 2009.
Matt Sayles/AP
Williams at the pre-premiere party for "Happy Feet Two" at the Grand Connaught Rooms in London on November 20, 2011.
Ian West/AP
Williams poses for photographs in Sydney, Australia, on December 5, 2011. He and Australian director George Miller were in Australia to promote "Happy Feet Two."
Tracey Nearmy/EPA/Landov
Upon his death, Williams' wife, Susan Schneider, said, "This morning, I lost my husband and my best friend, while the world lost one of its most beloved artists and beautiful human beings. I am utterly heartbroken."
CARL COURT/AFP/Getty Images

Letterman and Williams knew each other for 38 years

Letterman recalls seeing Williams first perform: "It's like nothing we had ever seen before"

“I knew Robin Williams for 38 years – 38 years – which, in and of itself, is crazy,” Letterman recalled in an extended reminiscence.

Williams died August 11 at his Marin County, California, home. He was 63. 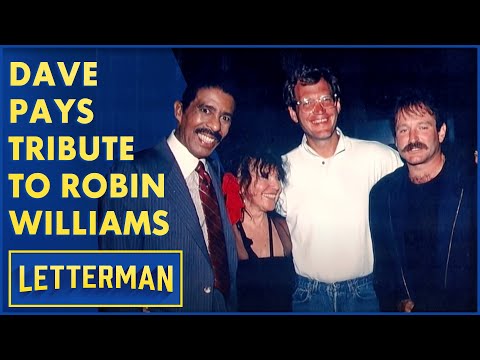 The two met at the Comedy Store, the famed West Hollywood comedy club, and Letterman remembered the first time he saw Williams – who had been introduced as being from Scotland – on stage.

He said he and his friends were “feeling pretty smug,” expecting trite jokes about haggis and the like. Instead, what they saw was Williams as audiences got to know him: a brilliant dervish, changing accents and making jokes faster than most people could think.

“It’s like nothing we had ever seen before, nothing we’d ever imagined before,” Letterman said. “We’re like morning dew, he comes in like a hurricane. … He finishes, and I thought, ‘Oh, that’s it, they’re going to have to put an end to show business.’ “

Robin Williams and the next generation of comics

Williams quickly became a star, first with an appearance on “Happy Days” as the alien Mork and then with the popular series “Mork & Mindy.” Letterman had a small role on one episode, thanks to Williams.

The comedian and actor later came on Letterman’s NBC and CBS talk shows a total of 50 times, Letterman said.

After showing a short video tribute of those appearances, Letterman noted that Williams’ death had caught him, like so many, off guard.

“What I will add here is that, beyond being a very talented man and a good friend and a gentleman, I am sorry I, like everybody else, had no idea that the man was in pain and the man was suffering,” said the visibly emotional host.

Robin Williams: The man beyond the screen

Letterman was on vacation last week when Williams died. Monday’s show was his first back in the studio.