The trio of two teens and a preteen has gained notice, opened for Guns N' Roses

A trio of middle school rockers has just unlocked a major record deal.

The Brooklyn metal band Unlocking the Truth has signed a $1.7 million recording contract with Sony.

The deal commits Sony to producing two of the band’s albums, as long as the first album sells more than 250,000 units. The three musicians – guitarist Malcolm Brickhouse, 13; bassist Alec Atkins, 13; and drummer Jarad Dawkins, 12 – will be paid $60,000 upfront for their first LP and could earn a $325,000 advance on their second. 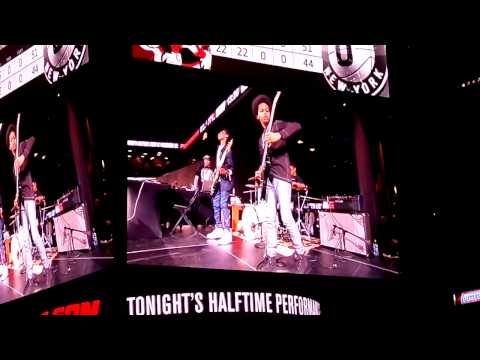 With Sony having the option to extend their contract for three more albums, Unlocking the Truth could earn $1.7 million.

The major label love is just one part of a stellar two years for the group.

After getting their first big break in 2012 during Amateur Night at New York City’s Apollo Theater, a YouTube clip of them playing in Times Square went viral in 2013. In June, Unlocking the Truth opened for Guns N’ Roses – and that was after happily crowdsurfing during a set at the Coachella music festival in April.

“Deep down, they know they are inspiring kids. They know they’ve done it and in their own way,” the band’s manager, Alan Sacks, said. “They know they’re representing a lot. It’s beyond African-American performers. They’re iconic for the whole world – for kids doing whatever you want and if you put your mind to it you can do it – as long as you have the talent, the motivation, the concentration and the patience.”

The trio is performing with the 2014 Vans Warped Tour, opening for Queens of the Stone Age, and plans to start recording in about four weeks.

“What started out as play dates went to Times Square and now this. It’s been one great thing after another,” Jarad’s mother, Tabatha Dawkins, told the New York Daily News. Of the record deal, she added, “It’s so exciting. We’re jumping over the moon.”

The three metalheads aren’t leaving behind school for music. Tabatha Dawkins said they’ll be entering the eighth grade at different schools in Brooklyn next school year and that education is still the top priority. In fact, Sony will pay out-of-pocket costs for academic tutors for each musician when they are unable to attend school.

“Schoolwork comes first,” Tabatha Dawkins told the New York paper. “If their schoolwork is not done, they don’t play.”