Robin Thicke has no idea what he’s doing

The couple announced their breakup in February

His new album "Paula" in inspired by Patton

Robin Thicke’s new album “Paula” is inspired by his estranged wife Paula Patton, but he hasn’t seen the woman herself in months.

“I try to keep most of that private, but I haven’t seen her for four months,” Thicke said. “I still had so much I wanted to apologize for and things I wanted to take responsibility for, that’s pretty much what the album’s about. … The album is exactly what happens when you lose the love of your life and you’re trying to figure it out in your head: ‘How am I going to move on, get through it all?’ “

The 37-year-old singer is the first to admit that he’s unsure if he’s going about that in the right way.

“I actually have no idea what I’m doing,” he told “Good Morning America” Tuesday. “I’m just kind of flying by the seat of my pants on this one. I just wanted to make something artistic out of a very difficult period.”

Thicke and his actress wife have known each other and dated since they were teens, eventually tying the knot in 2005. Yet in February, the couple announced that they’d mutually decided to separate and co-parent their 4-year-old son, Julian Fuego. 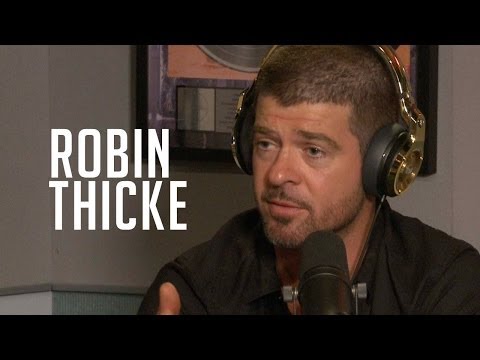 It seems Thicke has been obsessed ever since with wooing 38-year-old Patton, making public apologies, writing songs like “Get Her Back,” and filming an uncomfortably intimate music video that has become the gold standard of over-sharing.

Some said the breakup was due to Thicke’s rumored infidelity, and while the singer didn’t divulge details on Tuesday, he did confess to being dishonest.

“I’m a man. I messed up, and I had to lie for awhile,” Thicke told Hot 97. “And then I stopped lying. And that was actually good for me, because I was tired of lying. So this whole album is me revealing everything.”

But is Paula Patton listening? Doesn’t sound like it.

“She hasn’t heard (‘Paula’),” Thicke said of his estranged wife. “She’s only heard a few songs, and I don’t think she wants to hear it right now. I can’t speak for her, but space is an important part of any healing process.”

Robin Thicke is still trying to get Paula Patton back