He's excited by Pope Francis' message and emphasis on inclusion

John on his upcoming marriage: "It'll be very quiet and very off the cuff"

The musician, who plans to marry his partner David Furnish next year, talked to Sky News on Sunday about how pleased he is with Pope Francis and how he wishes the Church of England would show greater support for his message.

“The new Pope has excited me so much by his humanity,” John said. “He’s stripped it down to the bare bones and said it’s all basically about love and taking everybody in, inclusiveness. And that has to be encouraged by the Church of England.” 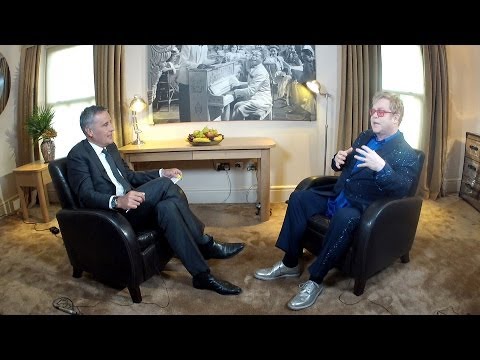 So when it comes to issues such as vows of celibacy for Catholic priests and gay clergymen being able to marry, John said the church needs to catch up with the times.

“These are old and stupid things, and the church hierarchy might be up in arms about it – the traditionalists – but times have changed,” John said. “We live in a different time. If Jesus Christ was alive today, I cannot see him, as the Christian person that he was and the great person that he was, saying this could not happen.

“He was all about love and compassion and forgiveness and trying to bring people together, and that is what the church should be about.”

As far as coming together for John’s nuptials, fans shouldn’t expect a large affair.

“It’ll be very quiet and very off the cuff,” John said. “But we will (marry), and I think it’s a great opportunity to take advantage of the new laws, and to celebrate it.”