The self-made TV star who’s the talk of Nigeria

Oprah, if you’re reading this, for goodness sake return this woman’s calls. Ask your assistants if there’s a box of yellowing fax messages lying around somewhere in Harpo Studios – she sent you one daily for a while.

Track down the ton of letters asking – pleading – for your help starting a Winfrey-style talk show in Africa. Because this isn’t just another eager fan. Her name is Mosunmola Abudu, and in the last nine years she’s done it – and then some.

With no TV experience whatsoever, Abudu has become the “Oprah of Africa” – it’s impossible not to read an interview with the glamorous 49-year-old without the moniker cropping up. And with good reason.

Breezing into CNN’s London studios, electric blue dress clinging to her slim figure, glossy pink eye shadow and lipstick to match, Abudu is in her element, the sound bites coming thick and fast.

And why wouldn’t the mother-of-two be comfortable in front of the camera? This is the face of “Moments with Mo,” the hugely successful talk show Abudu founded in 2006, attracting such high profile guests as Hillary Clinton and IMF chief Christine Lagarde.

The manicured Mo and her guests lounge in plush apartments, chat over coffee, contemplate tasteful visual cues. Africa’s first syndicated talk show was so slick that people initially questioned whether it could actually have been created in Nigeria.

Mo Abudu has built a media empire -- without any training.
Courtesy Mo Abudu

Abudu assured them it was. There was more to come. Nine months ago she started Ebony Life TV – Africa’s first global black entertainment network. Oprah who?

“When I started my journey into television, there was nothing that I didn’t try, to reach this woman,” says Abudu about her early attempts to contact Ms Winfrey.

“We sat for days on end, would send daily faxes, would send weekly faxes. At some point, when we didn’t get a response, we realized that Oprah wasn’t going to save us, she wasn’t there to help us to get this talk show of Africa started. And then I just basically got out there and said ‘let’s just do the very best that we can.’”

Winfrey or not, in less than a decade Abudu has built a TV network creating 1,000 hours of programming yearly. And there are plans to make even more channels – all under the Ebony Life banner.

But what makes Abudu’s story remarkable is not that she conquered African TV – but that she did it without any prior media experience.

At some point, when we didn’t get a response, we realized that Oprah wasn’t going to save us

“I went on a training course for learning how to present, went back and said: ‘Here I am and I want to produce my own talk show!’” said the British-born entrepreneur in an interview with CNN’s Stephanie Busari.

“Of course, there were many knock backs along the way, many people telling me ‘you can’t do these things.’ But I think what’s important in life is that you believe in yourself and the things you can do.”

Before she was the queen of African chat shows, Abudu was a head of human resources at oil giant ExxonMobil for a decade. Then there’s the consultancy firm she set up, the executive-training center she developed, and the charity she founded.

So where did this drive to be on TV come from? Abudu puts it down to a “deep-seated passion to tell Africa’s story.” Even if that meant standing in the middle of London with a microphone.

“A couple of years ago I stood there with a microphone, and just randomly stopped people in the street,” explained Abudu. “I said: ‘When you hear the word Africa, what comes to mind?’”

“I heard ‘starving children, poverty, HIV, Mugabe.’ I heard ‘babies with flies on their faces.’ And my next question was: ‘Why do you think this of Africa?’ And the response was: ‘It’s what I read in the newspapers, it’s what I see on television.’ Because that’s the popular notion of Africa.” 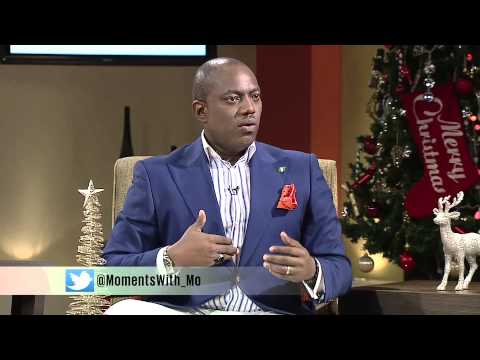 Not if Abudu has anything to do with it. Her show celebrates a very different continent, one brimming with entrepreneurs, academics, and artists, all taking their place on her coveted couch.

“It’s glossy, it’s got razzmatazz,” she says about her network’s distinctive style.

“It shows that there’s a new generation of Africans out there that want this content they can identify with, that speaks to them.”

Born in London, Abudu spent her early years between the UK and Africa. On holidays she would visit her grandparents’ cocoa farm, and remembers them spreading out beans to dry in the Nigerian sun.

Growing up in 1960s Britain was tough for one of only three black children in her school. She was asked questions like: “Do you guys live in tress? Do you dance around fires? What do you eat for breakfast?”

When she was 11 years old, Abudu’s father died, and her 73-year-old mother still remains a huge source of strength and inspiration.

It seems the ‘Oprah of Africa’ doesn’t need Ms Winfrey after all.