A contestant guess correctly with only two letters revealed

Pat Sajack said he was "rather stunned"

On “Wheel of Fortune” Wednesday, a contestant named Emil turned two letters into $45,000 during the bonus round. His luck (skill? clairvoyance?) shocked host Pat Sajak and thrilled the Internet.

After being given the letters “R, S, T, L, N, E” and selecting the letters “H, M, D, O,” Emil had only “N” and “E” to work with on the final puzzle, a three-word phrase which was simply described as a “thing.” Sajak advised him to just talk it out.

“You’re a very good puzzle solver, but I don’t know,” Sajak said. “You have 10 seconds. Keep talking. Maybe the right thing will pop out. Good luck.”

Emil nailed it on his first try: “New baby buggy.” 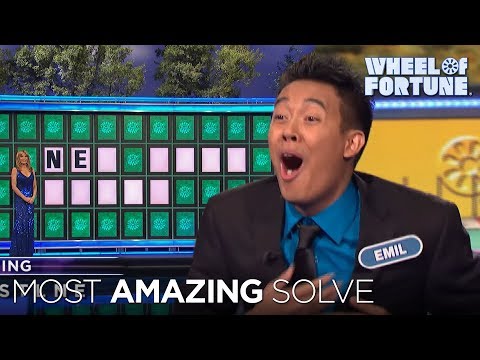 His shock that he had guessed it caused Emil to utter, “Oh, my God,” jump in the air and grab his heart. Sajak jokingly patted him down (perhaps for some sort of secret puzzle-solver device) and said, “I’m rather stunned!”

The host later tweeted “Tonight’s ‘Wheel of Fortune’ features most amazing solve in my 30+ years on the show. No kidding.” The video of the win has since gone viral.