Oscars 2014: Pizza, Travolta and the rest

John Travolta totally messed up the pronunciation of "Idina Menzel"

Ellen committed to her pizza joke

Pharrell's shorts did not go over well

By most estimations, the Oscars show was somewhat staid this year. Some of Ellen DeGeneres’ jokes fell flat, no one got bleeped, and at one point whatever was happening on Amy Adams’ phone was way more interesting than the actual show.

But there were a few things that happened that the Internet has fallen in love with – other than Ellen’s selfie, we mean. Things like:

Perhaps he is not a Broadway fan or missed all of the hubbub about “Frozen.”

Dude, that wasn’t even close. We expected better from someone who started his intro with “There will always be a special place in my heart for the movie musical.”

Yep, that was an honest-to-goodness pizza delivery that happened during the show. Ellen joked about sending out for some pies, and sure enough, a deliveryman from Big Mama’s & Papa’s Pizzeria appeared. He didn’t give his name, but word is his co-workers were cheering for him.

Of course she passed the hat (Pharrell’s, naturally) to take up a collection for his tip, though it looks like he left without collecting it. The chain, which has stores throughout Los Angeles, wasted no time in tweeting about the delivery, as did pregnant actress Kerry Washington, who DeGeneres wanted to make sure got a slice.

Kudos to John Ridley for winning the Oscar for best adapted screenplay for “12 Years a Slave.” But he noticeably did not thank the film’s director, Steve McQueen. And McQueen’s reaction in the audience to Ridley’s win didn’t look very joyous. Actually, it appeared that at some points McQueen’s hands didn’t even touch and instead there was a faux-clap.

Once again Leonardo DiCaprio was passed over for an Academy Award, and once again fans roared.

DiCaprio lost the best actor award to Matthew McConaughey, and many were not pleased. It marks the fourth snub by the Oscars for Leo, who was nominated this year for “Wolf of Wall Street” but has previously lost with nominations for “What’s Eating Gilbert Grape,” “The Aviator” and “Blood Diamond.”

“Poor Leo you could see he is trying to hold back the tears,” tweeted one fan with a pic of what looked to be a dejected Leo responding to his name not being called.

And then there was the “And this is where I’d put my Oscar … if I had one” illustration of the actor.

Yes, it is Los Angeles, where it’s sunny and warm, and maybe Pharrell was just overjoyed that the Oscars red carpet was spared the predicted rainstorm. Otherwise, we have no way of understanding why Pharrrell Williams showed up in shorts.

The singer-songwriter-producer and his wife appeared on the red carpet with her in a feminized version of a tux, and him in formal wear only from the waist up. He may have been “Happy” with his fashion choice, but many weren’t.

“Pharell is slowly turning into a park ranger,” tweeted one viewer, who clearly was paying homage to our favorite Pharrell fashion item, his Smokey the Bear-like hat.

No, Pharrell. JUST NO. NEVER. #Oscars

Pharell is slowly turning into a park ranger.

We would like to think Pharrell made up for it with his rousing performance of his song “Happy” from “Despicable Me 2,” which got the crowd moving. 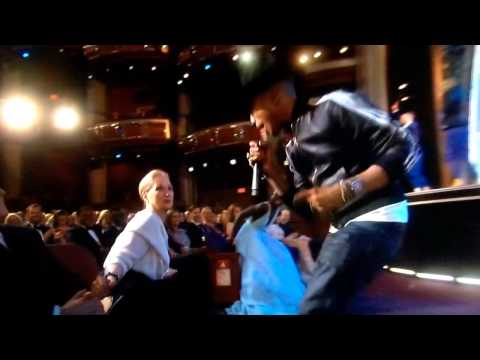 After all, anyone who can get Meryl Streep to shimmy can’t be all bad, right?