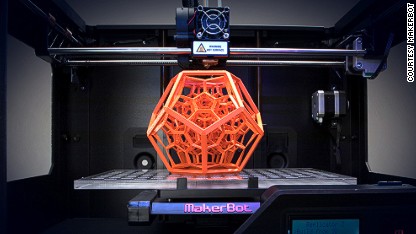 Personal 3-D printers may sound like a pricey luxury or a niche product for geeks, but soon they could become a household appliance that saves people thousands of dollars a year.
Researchers at Michigan Technological University conducted a study to find out how much a family might save by printing common objects, such as simple replacement parts or toys, at home instead of buying them in stores or online.
"It was relatively shocking what the return on investment was," said associate professor Joshua Pearce, who led the study. "Realistically, it's in the thousands."
Much of the recent 3-D printer hype has focused on how the technology is going to revolutionize the manufacturing industry or what cool things it can create -- human organs, duck feet, see-through hermit crab shells shaped like cities. But it's the small, mundane objects that could have the most immediate impact on wallets. (Especially if you print your own wallet.)
Read More
Printing 3-D objects does require a big upfront investment. Current desktop 3-D printers cost between $350 to $2,000. For the study, researchers used a $575 RepRap printer and selected 20 free 3-D designs that were available online.
Their calculations didn't take into account shipping costs or sales tax associated with buying from a retailer. The researchers say they did that to keep the estimates for the study on the conservative end.
"We assumed the average family would only make 20 items a year, which is silly because if you get one of these you'll make 20 items in one weekend," said Pearce. 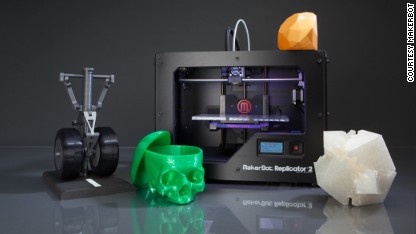 The MakerBot Replicator 2 is one of the more popular desktop 3-D printers.
After printing all 20 objects, the researchers tallied the cost of plastic and electricity needed to make each and compared it to the low- and high-end versions of the same product from retailers. For example, a shower head costs $2.53 to make on the 3-D printer (3 cents for electricity, $2.50 for plastic). A comparable model costs anywhere from $8 to $437 at a store.
According to the study, the biggest savings were with objects that could be customized, like orthotic insoles for shoes. A custom insole can cost $500 to $800 from a retailer, but someone could create an insole on a 3-D printer for about $2. It does take more skill -- and advanced equipment, like a 3-D scanner -- to create the custom shape, but once you have the optimal design it's simple to produce multiple copies with no additional effort.
The team printed a variety of doodads for the study, including an iPhone case, garlic press, safety razor, perogi mold and spoon holder. Smaller mass-produced objects saved the least amount of money -- a dozen 3-D printed shower rings cost $1.20 to print and $2.99 to purchase from a store. The iPhone 5 case cost 27 cents to print, a huge improvement over the inflated $20 price tags found in Apple Stores and other retailers.
Printing all 20 objects took about 25 hours and cost a grand total of $18 in plastic and electricity. The savings came out to between $294 and $1,926, depending on the quality of the comparable retail products.
Free open-source files are a key part of keeping 3-D printing costs low. There are online databases of designs, like Thingverse, that anyone can download and create with printer at home. If you pay for a 3-D design or invest time in making your own, the cost per object will go up.
Pearce says replacement parts will be a major category for personal 3-D printers. Customization will be another big trend in the future, as people turn to these printers to create things they can't find at a Wal-mart. The types of printable materials will expand as well. Right now you can only print a plastic smartphone case, but in the next year you should be able to print a case with an antenna in it. After that, whole circuit boards for the phone.
And desktop 3-D printers wouldn't just save cash; they could also help save the environment by cutting down on packaging and pollution from transportation.
The technology of 3-D printing has improved in recent years. Higher-end models can be used by anyone with minimal set up and training, and using pre-made files means you don't have to know how to create a 3-D design. Improved software is already making it easier to customize those designs with an easy-to-use interface.
Instead of a 3-D printer in every living room, Pearce can also see local stores setting up 3-D printers. The cost to consumers would be slightly higher, but they wouldn't need to buy a printer -- and that paper-towel holder will still be cheaper than a retail model.