Controlling flying robots with your mind 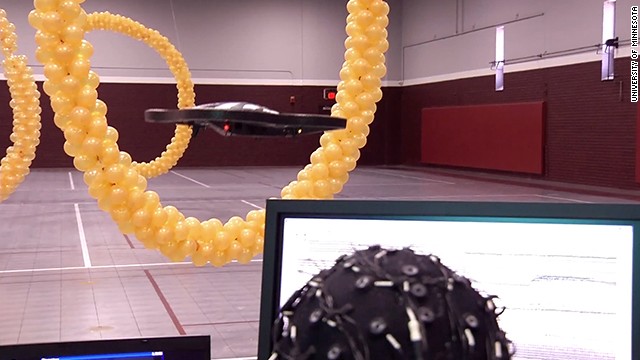 A graduate student wearing a skull cap covered in wires sits perfectly still and thinks about making a fist with his right hand.
Nearby, a small quadcopter -- a flying drone with four rotors -- turns right. He imagines making a fist with his left hand and the robotic flying copter goes left. After a thought about clenching both hands, it lifts higher into the air.
He is controlling the device with his mind.
The system is part of a new research project that reads the brain's electrical activity and translates certain thoughts into commands for the unmanned aerial vehicle. It's called a brain-computer interface, and someday it could have important uses for people who are paralyzed.
Read More
"We envision that they’ll use this technology to control wheelchairs, artificial limbs or other devices," said University of Minnesota engineering professor Bin He in a post announcing the project. 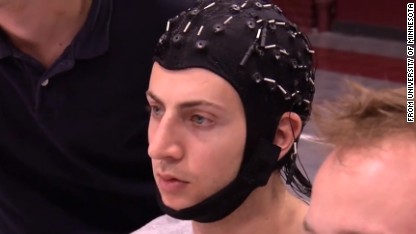 This graduate student wears a special skull cap that allows him to manipulate the flying robot with his mind.
Here's how it works: Imagining specific movements without actually doing them produces electric currents in the motor cortex. The interface itself isn't new, but the researchers used brain imaging scans to find out exactly which imagined movements activated which neurons.
Once they mapped out the various thoughts and associated signals, they used them to control a helicopter simulation on a computer. Next, they moved on to real flying devices.
There are no implants or invasive brain tweaks needed for subject to control the copter with their brain. The technology is called electroencephalography (EEG). The skull cap uses 64 electrodes to detect these currents from a subject's brain as they think about associated actions, then translates that data into instructions and transmits them to the quadcopter over Wi-Fi.
In the test, pilots weren't allowed to look at the quadcopter while they controlled it, only a screen showing the view from a small camera mounted on the front of the flying vehicle. After a few hours of training, the subjects could move the quadcopters with precision, even  guiding them through hoops suspended from the ceiling.
Flying is just the start for this technology, He said.
"It may even help patients with conditions like autism or Alzheimer’s disease or help stroke victims recover," he said. "We’re now studying some stroke patients to see if it’ll help rewire brain circuits to bypass damaged areas."