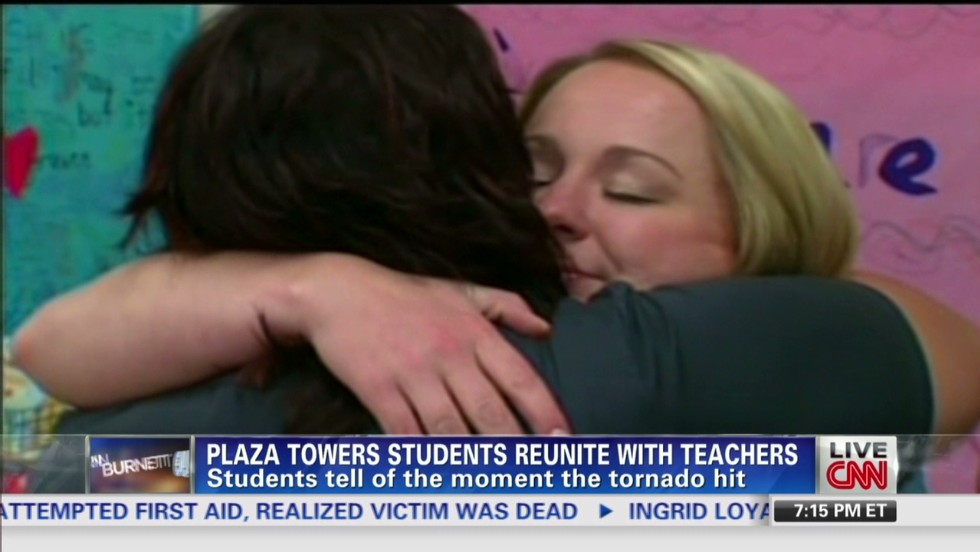 (CNN) -- The sign that covered a set of doors read, "We Love You Plaza Towers."
Children, toting big book bags and balloons, hugged their teachers and said goodbye before departing for the summer.
Many managed a smile despite the sad fact these end-of-the-year moments took place at Eastlake Elementary School because Plaza Towers is just a huge pile of rubble.
Kaylee Sanchez, a kindergartner who was shielded by one of her teachers as the storm plowed over Plaza Towers, said she was "freaking out" before going to Thursday's reunion.
Read More
But once she and the other children got there, laughter and playfulness returned to a group that suffered the worst when an EF5 tornado struck Monday.
Seven of their schoolmates were killed by the storm, which lead to 17 other deaths.
Kaylee's mother, Maria, applauded administrators for putting together the sendoff where students also received a backpack full of activities, snacks, stuffed animals and some basic necessities for the coming days.
"It's a really good thing because they get to see all their friends to make sure they are OK," Maria Sanchez said. "It's a good atmosphere to see the all these kids laughing and playing. ... My own daughter has been scared until today. When it started storming this morning she didn't want to come."
Pounding rain soaked Moore on Thursday morning, and winds sent pieces of debris flying, hindering recovery efforts three days after the devastating tornado.
Once she got there, Maria and the other children spilled around, and raced up to each other when they saw someone they had been worrying about.
Emily Stephens, a student at Plaza Towers, said she was in an underground shelter when the tornado hit.
"I just hope everyone's OK," she said. "I hope they get a new house -- and a better one."
Stephens said "some of my house got ripped down."
She was happy to get the crayons, books and candy and, most importantly, see her classmates.
"It makes me glad to see my friends and that they're alive," she said.
Read the full story
© 2020 Cable News Network, Inc. A Time Warner Company. All Rights Reserved.
CNN Sans ™ & © 2016 Cable News Network.