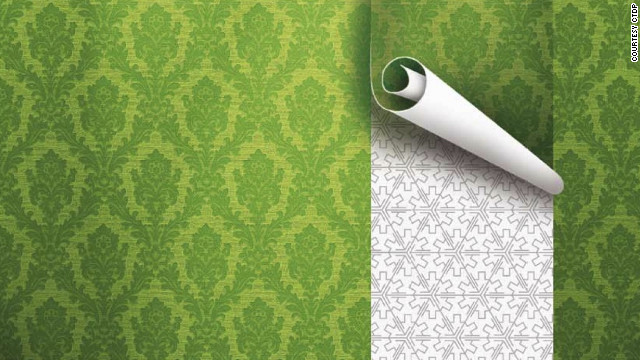 By Olivia Smith, Special to CNN

New York (CNN) --- Imagine wallpaper that does work for you and for your electronics. Wallpaper that doesn’t only protect your walls, but also protects your health, equipment and data.
Researchers at France’s Institut Polytechnique de Grenoble have worked with the Centre Technique du Papier to develop Wi-Fi-blocking wallpaper. The product, also known as metapaper, claims to selectively filter, reduce or reflect electromagnetic waves.
Metapaper not only protects against intruders stealing Wi-Fi from buildings, but also ensures that signals inside a building are more secure and stronger, the group says. Benefits include data security for companies or people that need dependable Wi-Fi. The wallpaper can also be used to create quieter spaces for places like hospitals and movie theaters.
The high-tech paper does, however, allow FM radio waves and emergency frequencies to pass through. The paper, which has a snowflake pattern on it but can be covered up by traditional wallpaper, is made from renewable resources and is recyclable, according to the Centre Technique du Papier.
Read More
Conductive silver ink and metallic patterns on the wallpaper filter around 99% of waves coming from outside, according to the French newspaper Le Monde, which published a story on the topic earlier this year. However, a room cannot be completely safeguarded by the paper -- unless you use it to seal off floor, ceilings and windows, of course.
The metapaper also advertises itself as a healthy alternative, since it claims to reduce a person's exposure to electromagnetic waves. Scientists behind the product point to studies that say the overuse of wireless technology could cause harmful heath effects.
The Finnish firm Ahlstrom acquired the rights to the metapaper. Exact cost estimates have not been released. According to the Centre Technique du Papier, the paper is not yet commercially available because it is still in the industrialization phase.