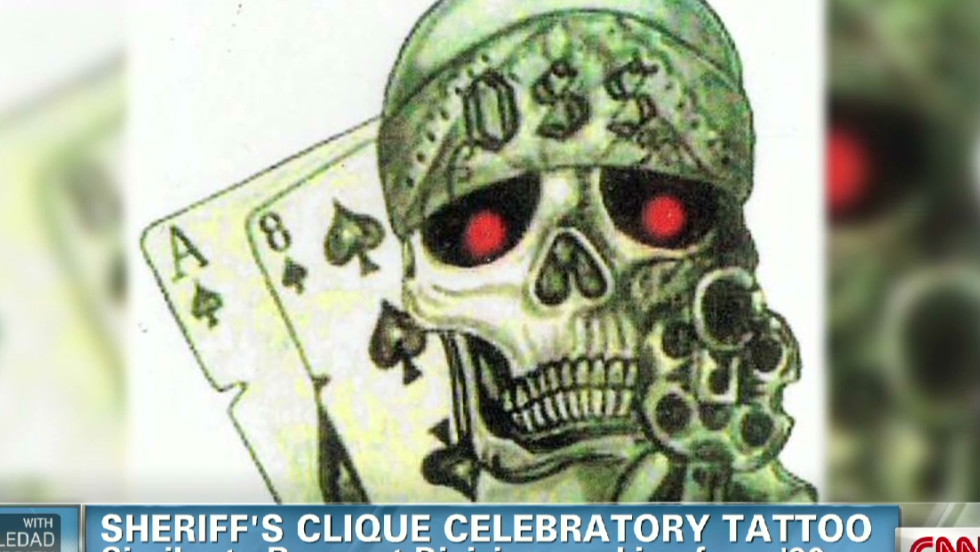 An officer's badge may not be the only badge of honor sported by a Los Angeles County police unit. Recently, a secret deputy clique was uncovered within the gang enforcement unit of the Los Angeles Sheriff's Department and marks its members with a different badge: permanent ink.

The "Jump-Out Boys" allegedly tattoo themselves with the image of a skull with glowing red eyes. The skull wears a bandana with the letters "OSS" -- short for Operation Safe Streets, the larger initiative which established their unit to clear city streets of gangs. An ace and eight of spades, the so-called "Dead Man's Hand" in poker, fans out to the left of the image, with a skeletal hand brandishing a revolver to the right side. Reportedly, after a member is involved in a shooting, smoke is tattooed over the barrel of their gun -- an enduring sort of high-five for a mission accomplished.
The tattoos harken back to other law enforcement "gangs" which branded members in a similar manner, and ultimately, Soledad said, the concern is that the ink glorifies violence -- especially considering the unit's task is to comb neighborhoods labeled for "dangerous gang activity" and disarm gang members.
"Los Angeles Times" reporter Robert Faturechi explains.
© 2020 Cable News Network, Inc. A Time Warner Company. All Rights Reserved.
CNN Sans ™ & © 2016 Cable News Network.
<