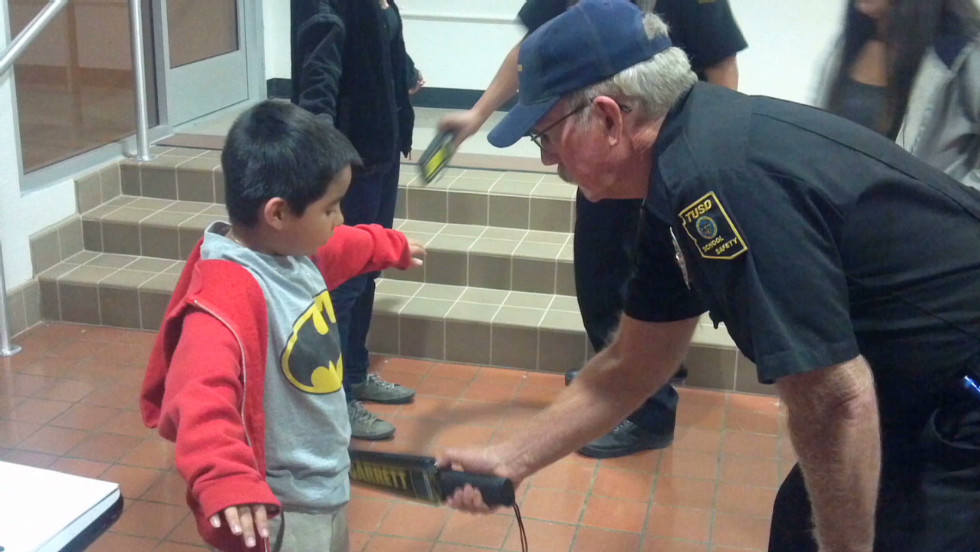 Editor's Note: Roberto Rodriguez, the Mexican-American Studies professor who took the photo of Nicolas, has written an opinion piece.  It can be viewed here.

By Thelma Gutierrez and Traci Tamura, CNN
Tucson, Arizona (CNN) -- It was the evening of March 13, people lined up outside the Tucson Unified School District office in Tucson, Arizona, to attend a school board meeting. Nine-year-old Nicolas was in line with his teenage sister Juliana, waiting to enter the meeting. Juliana, who is in high school, was there to voice her support for the Mexican-American studies program, which was dismantled this year after it was banned by the state.
One by one, each person had to first go through security screening. It wasn’t until Nicolas, wearing a yellow Batman t-shirt, standing with his legs and arms spread apart while being wanded by an armed security guard, that Roberto Rodriguez, an associate professor of Mexican-American studies at the University of Arizona, took notice of the process. Rodriguez grabbed his phone and took two photographs of Nicolas going through security.
Rodriguez, who is also a syndicated columnist, says he sent one of the photographs to several colleagues. Before he knew it, the picture went viral. It seemed to strike a nerve with some people, particularly within the Latino community, who say the pictures symbolize what Rodriguez calls an anti-Latino, anti-immigrant atmosphere in Arizona.
Read More
He cites the passage of several pieces of legislation in the state: SB 1070, the controversial anti-illegal immigration law, Arizona’s English-only education law, and HB 2281, a law passed in 2010 that prohibits courses aimed at a particular ethnic group, like Mexican-American studies. The program was designed to teach students American history, American government, literature and art through a Mexican-American perspective.
In January, the program was formally dismantled. Tucson school board member Michael Hicks said the board had no choice but to follow state law.
The move angered students and supporters of the program who fought to save it. Last April, a group of high school students took over a school board meeting, chaining themselves to chairs.
Hicks said the current increased security measures at school board meetings are partly in response to the student takeover. He also tells CNN recent tragedies like the 2011 shooting of Congresswomen Gabrielle Giffords, and a standoff with an armed man at a Florida school board meeting in 2010, warrant additional security.
The security guards, many of whom are armed, are there to insure the safety of all who attend school board meetings, Hicks said. But some parents, like Tanya Alvarez, who is engaged to Nicolas’ father, aren't convinced. Alvarez says school board meetings are public forums to openly discuss education, and going through security screening is intimidating and might keep families away.
© 2020 Cable News Network, Inc. A Time Warner Company. All Rights Reserved.
CNN Sans ™ & © 2016 Cable News Network.